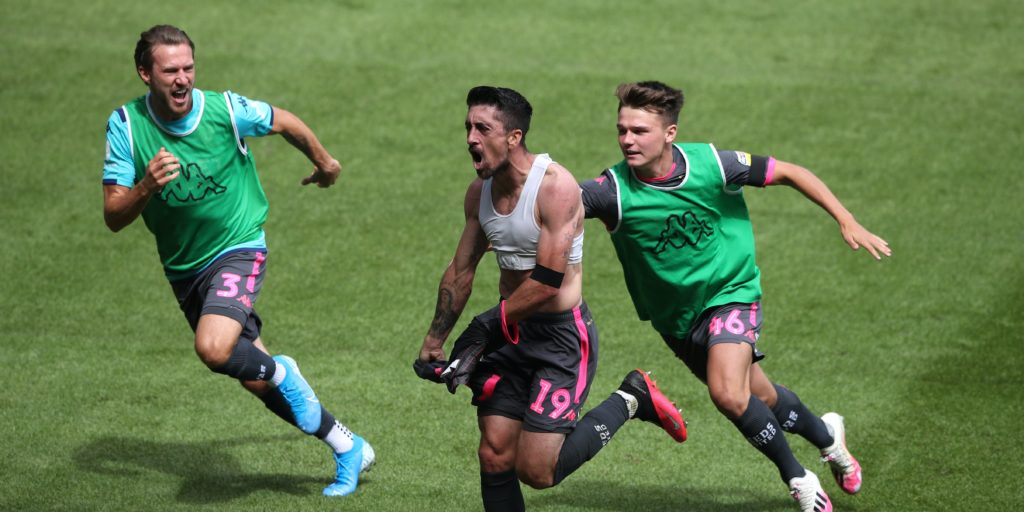 The Spaniard’s winner stopped Swansea from moving into the play-off places.

Pablo Hernandez moved Leeds closer to the Premier League as his late strike against his former club Swansea gave United a 1-0 victory at the Liberty Stadium.

Hernandez spent two years at Swansea between 2012 and 2014 and was a popular figure during his time in south Wales.

But the Spaniard has probably not scored a more important goal than the one that he managed in the 89th minute, controlling Luke Ayling’s cross to roll the ball home off a post.

It was a goal that moved Leeds three points clear of second-placed West Brom, and more importantly six ahead of in-form Brentford in third.

While Leeds need four points from their three remaining games to end a 16-year wait to play top-flight football, Swansea had missed out on the draw required to take them into the play-off places.

Hernandez’s winner was the fitting end to a day when Leeds remembered the life of club great Jack Charlton – who made 773 appearances for them between 1953 and 1973 – before kick-off.

A minute’s silence was followed by warm applause from both sets of players and management staff, with Charlton’s image shown on the main scoreboard at the Liberty Stadium.

Leeds had not won in Swansea since April 1964 – a 3-0 victory in which Charlton featured – but that was possibly a good omen as they were promoted into the top flight as second-tier champions that season.

Swansea had the better of the opening quarter with Conor Gallagher particularly lively and drifting into some dangerous areas when combining with Andre Ayew.

Connor Roberts’ persistence set up Rhian Brewster for a snapshot, which was struck well but comfortably handled by Illan Meslier in the Leeds goal.

Gallagher then had an effort blocked before the on-loan Chelsea playmaker set up Jay Fulton for an 18-yard drive which cleared the crossbar.

Leeds finally stirred and were almost gifted the lead when Jack Harrison’s cross came close to being diverted past Swansea goalkeeper Freddie Woodman at his near post.

Stuart Dallas tested Woodman with a low drive but the contest was becoming increasingly tetchy with bookings for home pair Brewster and Fulton and Leeds midfielder Mateusz Klich.

Woodman was forced into another save from Patrick Bamford before Meslier backtracked to hold a Jake Bidwell header under his own crossbar.

Leeds head coach Marcelo Bielsa sent on Hernandez and Ezgjan Alioski at the break and the tempo of their play was sharper.

But Swansea countered quickly and Gallagher burst past a couple of defenders to deliver a near-post drive which Meslier helped over the bar.

Hernandez made an impact on the contest by finding Harrison at the far post with a raking diagonal pass.

Harrison cushioned the ball into Bamford’s path and, although Woodman reacted well on his line, he should not have been afforded the opportunity to save.

But Swansea lost out on the point needed to climb above bitter rivals Cardiff into sixth spot, and suffered further misery in the final moments when Woodman hobbled off with a leg injury.