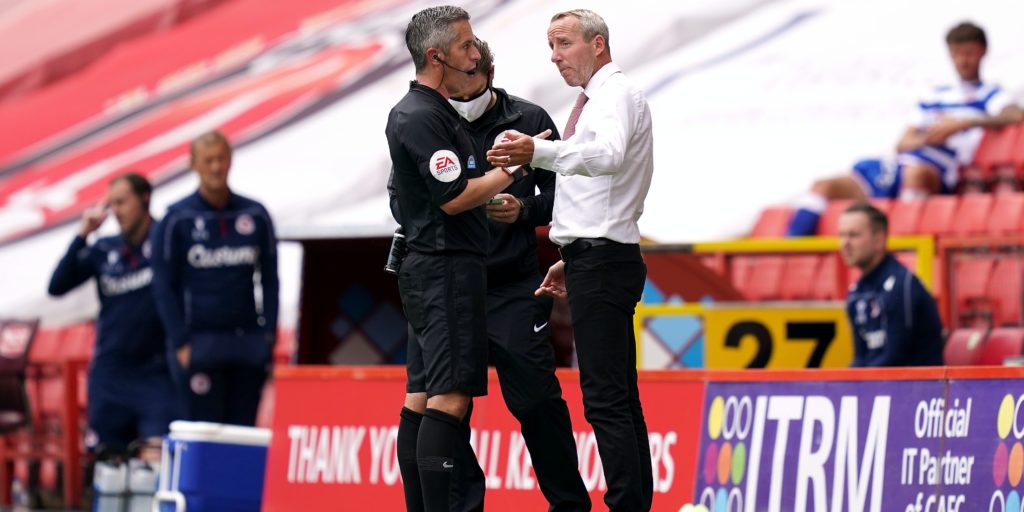 Bowyer’s side had a goal ruled out for offside and were denied a late penalty.

Lee Bowyer hit out at refereeing decisions that leave “careers on the line” after Charlton’s 1-0 Championship loss to Reading.

“It’s disappointment, again, it’s another game that we should have got something from and we haven’t really done much wrong,” said Bowyer.

“They get a penalty early on, and then after that I thought we were the better side.

“I thought we created more clear-cut chances again. And decisions have cost us.

“The officials have cost us the game today, it’s plain and simple.

“Chuks Aneke, his goal is a goal. And I said to the fourth official, ‘the linesman can’t just guess’.

“You have to be 100 per cent right on these decisions, these are big moments, there are careers on the line.

“My players give everything and we haven’t got our rewards.

“If their penalty was a penalty then so was ours, because Jake got dragged to the floor, and it’s a penalty.

“So you’ve got the offside and the penalty. Big decisions.

“I’d love to know what he puts in his report, because I know my report isn’t going to be good for him.

“Something has to be done, because that wasn’t up to scratch, all of them, the ref and the two linesmen.”

Charlton now face Birmingham, Wigan and Leeds and must get back to winning ways to preserve their Championship status.

Bowyer admitted his side’s poor finishing left them pulling up short at The Valley, with a big trip to St Andrew’s next up on Wednesday.

“Macauley (Bonne) has to score, has to score, can’t keep missing chances like that, three yards out,” said Bowyer. “Connect with the ball properly and you score. It isn’t good enough.

“We’ve done enough to win the game but come away with nothing, again.

“And we’ve got three games to go and we’ll keep fighting until the end.

“Wednesday becomes a massive game now against Birmingham. Hopefully we might even get a decision go our way.

“That penalty against Brentford was soft as well. The big decisions aren’t going our way, I don’t know why, but they are not.”

Mark Bowen admitted his sympathy for Bowyer’s frustrations, with the Royals boss relieved to leave The Valley with all three points.

“I felt a bit sorry for Lee Bowyer, it was one of those days when they were screaming for everything, and got nothing,” said Bowen.

“There were decisions that I raised my eyebrows at too.

“Maybe on another day you get a few decisions that they didn’t today.

“You hope that these things even out over the season but obviously it’s tough for teams down at the bottom of the table.

“These things have happened to us in the past, and we have to take what we can get.”