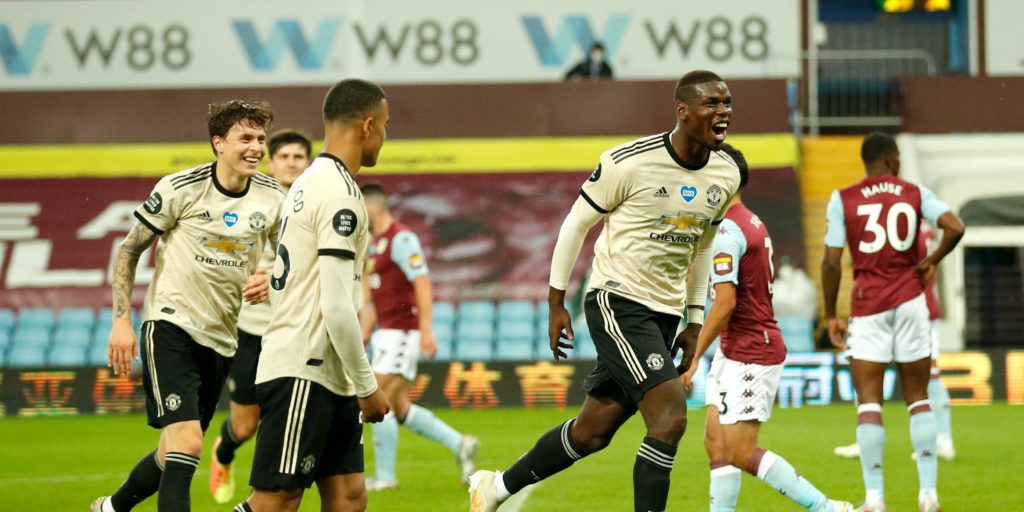 United extended their unbeaten run to 17 games in all competitions.

David De Gea has warned Manchester United they have achieved nothing yet.

Bruno Fernandes’ controversial penalty – after he was awarded a spot-kick when he trod on Ezri Konsa – Mason Greenwood’s blistering strike and Paul Pogba’s first goal of the season earned a comfortable victory.

Fifth-placed United are a point behind Leicester – who they face on the final day of the season – and two adrift of Chelsea as they bid to return to the Champions League.

But with four games remaining De Gea insisted the job needs to be completed.

The goalkeeper said: “Of course we are very confident now but we haven’t done anything yet. We have some important games coming now so we need to be very, very focused and keep the level that we showed today and in the last four games.

“We’re in a good mood, a good way, so yes, we keep looking forward to the next game.

“We’re really happy with three massive points and we’re really close to fourth and third positions. We are showing a lot of good things, like we did in the last three or four games. It’s great to see the team performing like this.

“For the first 30 minutes they pressed really high and hit the post but after we scored the first goal they opened more and we created more chances and scored a very important goal, the second goal.

“We controlled the game very well, we didn’t concede many chances so it was a really good performance.”

De Gea had little to do once Fernandes scored his dubious penalty, which came after Trezeguet had hit the post for Villa.

The Spain international kept a clean sheet on his 399th appearance for United, the most games of any overseas player for the club, surpassing Peter Schmeichel’s record.

“Sorry to Schmeichel,” he told mufc.com. “It’s great. That means I’ve been here a long time and I’ve been playing really, really well to the top level so I’m really, really proud. I’m happy to play for this club for that many games.

“Hopefully I have another 400 games coming. So I’m really, really happy.”

Defeat left Villa four points from safety and running out of games to save themselves.

They host Crystal Palace on Sunday and boss Dean Smith knows they face a battle to avoid an instant return to the Sky Bet Championship.

He said: “I felt it would come down to these last four and we’ve got to make sure now that we dust ourselves down from this result and get ready.

“We’ve got four matches now against teams who I believe we can be competitive against.

“It was always going to be hard against Liverpool and Manchester United, we knew that.

“But we had belief in both games and I think at times you could see that.”