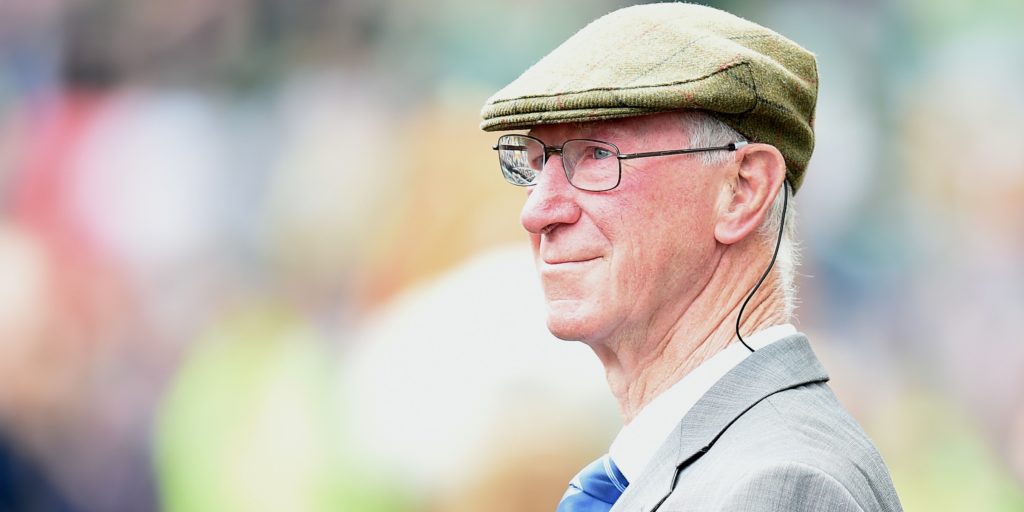 The former Leeds defender and Republic of Ireland manager had been diagnosed with lymphoma in the last year.

Jack Charlton, the former Leeds and England defender who won a World Cup winner’s medal in 1966, has died. He was 85.

Charlton had been diagnosed with lymphoma in the last year and was also battling dementia.

He spent his entire 21-year playing career at Leeds, making a joint club record 773 appearances, before retiring as a player in 1973 and going on to enjoy a successful and colourful career as a manager.

One of English football’s most popular and larger-than-life characters, he had spells in charge of Sheffield Wednesday, Middlesbrough, Newcastle and the Republic of Ireland, who he guided to their first major finals at Euro 88 and two more in the space of 10 years.

A family statement read: “Jack died peacefully on Friday, July 10 at the age of 85. He was at home in Northumberland, with his family by his side.

“As well as a friend to many, he was a much-adored husband, father, grandfather and great-grandfather.

“We cannot express how proud we are of the extraordinary life he led and the pleasure he brought to so many people in different countries and from all walks of life.

“He was a thoroughly honest, kind, funny and genuine man who always had time for people.

“His loss will leave a huge hole in all our lives but we are thankful for a lifetime of happy memories.”

Central defender Charlton, older brother of former England and Manchester United midfielder Bobby, made his debut for Leeds in the old Division Two in 1953 and went on to become the bedrock of the great Leeds side built by former manager Don Revie.

His golden moment as a player came at Wembley in 1966 when he and brother Bobby were team-mates in England’s World Cup win against West Germany after extra time.

Charlton did not win his first England cap until he was 29, in 1965, and played his 35th and final match for his country in the 1970 World Cup finals in Mexico in a group game against Czechoslovakia.

A towering, uncompromising centre-half, he won the Football Writers’ Association’s Footballer of the Year award in 1967.

He announced his retirement as a player aged 38 soon after missing out on Leeds’ 1973 FA Cup final defeat to Sunderland through injury and was made an OBE the year after for his services to football.

In his first job as manager, Charlton won promotion to the top flight with Middlesbrough in 1974 and narrowly missed out on repeating the feat at Sheffield Wednesday, who he had guided from the bottom of the third tier.

Charlton’s spell in charge of Newcastle lasted one season before he resigned in 1985 and in December of that year he became the first non-Irish manager of the Republic of Ireland.

Charlton, already hugely popular for getting them there, won the hearts of a nation and the rest of the footballing world as his side reached the quarter-finals.

After leading the Republic to the 1994 World Cup finals in the USA – they lost to Holland in the last 16 – Charlton was awarded the Freedom of the City of Dublin. In 1996, he was awarded honorary Irish citizenship.

Charlton had his critics as both a player and a manager, but overcame any limitations with sheer force of character.

A big man with a bigger personality, he left a lasting impression on everyone he met.

A statement on Leeds’ website read: “Charlton’s contribution to the game and Leeds United will never be forgotten.

“He will remain in football folklore forever and his records at Leeds United are unlikely ever to be surpassed.

“Naturally, our thoughts are with Jack’s family and friends at this difficult time.”

The Football Association of Ireland said it is “deeply saddened to learn of the death of Jack Charlton, the manager who changed Irish football forever. Our thoughts are with Pat and the family at this sad time.”

The Football Association said: “We are devastated by the news that Jack Charlton, a member of our World Cup-winning team of 1966, has passed away.

“Our deepest sympathies are with Jack’s family, friends and former clubs.”