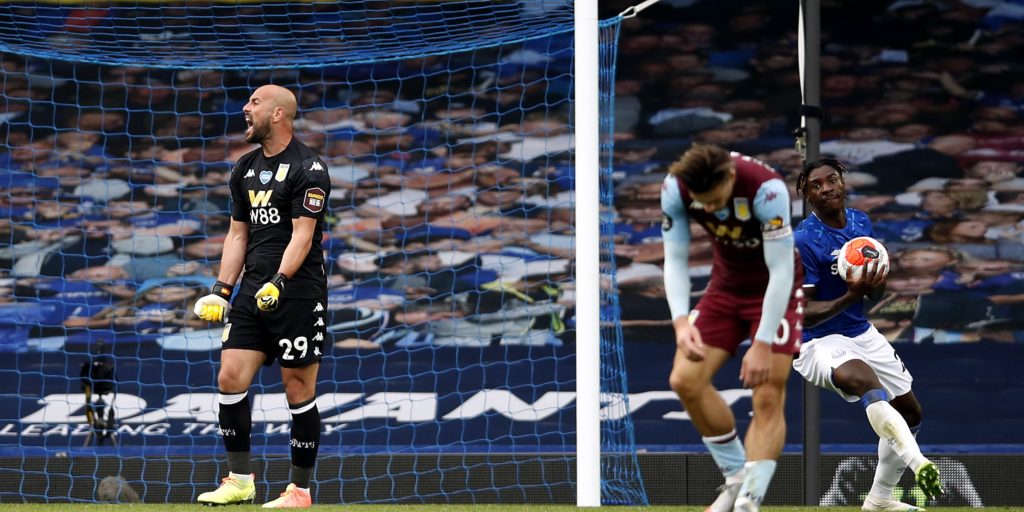 Dean Smith’s side are three points from safety with only two games remaining.

Aston Villa’s Premier League future hangs by a thread after Theo Walcott’s 87th-minute header meant Dean Smith’s struggling side had to settle for a 1-1 draw at Goodison Park.

The visitors looked like they had given themselves a lifeline through Ezri Konsa’s first top-flight goal 18 minutes from time but the centre-back’s desperate overhead kick failed to keep out the Toffees substitute’s late effort to dash their hopes.

As a result Villa, with an inferior goal difference, remain three points from safety which means they realistically have to get something out of next week’s visit of Arsenal if they are to take it to a potential last-day decider at West Ham.

They were left to rue Anwar El Ghazi’s miss-of-the-season contender 10 minutes from time when he ballooned over from close range.

It was a missed opportunity for the visitors in a generally dire game in which the goals were the only shots on target, which spoke volumes about the current malaise in which both clubs currently find themselves.

Everton manager Carlo Ancelotti made five changes after labelling Sunday’s defeat at Wolves “unacceptable” and initially it had the desired effect as his side started brightly.

But that quickly faded and within 15 minutes the momentum had changed with only a mis-hit cross onto the top of the crossbar from Bernard, one of those recalled, to show for that early effort.

Central defender Mason Holgate’s comeback after a two-match absence with a shin injury lasted about as long before he was forced off and replaced by 18-year-old Jarrad Branthwaite, who despite making only his second Premier League appearance slotted in fairly comfortably.

The real issue for Everton lay further forward with them losing the midfield battleground once again, struggling to handle Jack Grealish’s free role coming in off the left.

Villa’s captain was at the heart of the most incisive passing moves and had the best chance of the first half, robbing Andre Gomes before having a shot deflected over, while dragging wide early in the second.

The England goalkeeper did not help himself when he was almost caught in possession by Samatta moments later as Ancelotti’s frustrations grew not just with him but the whole team.

With 18 minutes to go the Italian’s fears were realised as Konsa touched home Conor Hourihane’s cross for only this third club goal.

El Ghazi’s glaring miss from barely a couple of yards could have settled the nerves, which were jangling when Dominic Calvert-Lewin stabbed wide and Villa hearts were broken when Walcott nodded home to extend an 11-match unbeaten home league record.