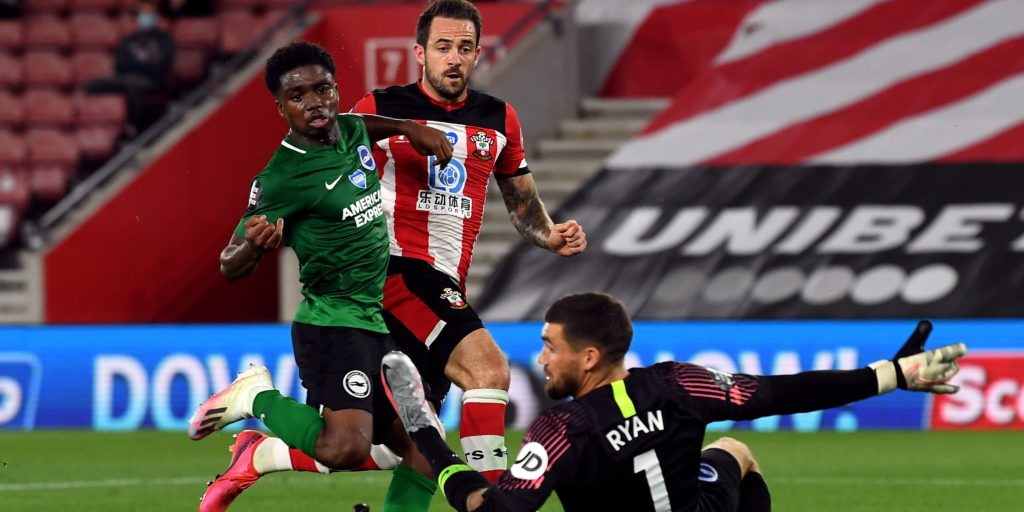 The Saints marksman netted his 20th Premier League goal of the season as the game ended 1-1.

Danny Ings struck his 20th Premier League goal of the season as Southampton fought back to secure a 1-1 draw which almost certainly guarantees safety for Brighton.

Ralph Hasenhuttl’s mid-table hosts had taken 11 points from 18 since football resumed ahead of kick-off but were guilty of a limp first-half display.

They improved considerably after the restart and were unfortunate not to win having struck the woodwork either side of the leveller through Ings and Jannik Vestergaard.

Saints were afforded 48 hours less to prepare for this match than their opponents after snatching a 2-2 draw against Manchester United on Monday evening.

Albion were looking to bounce back from successive home defeats to Manchester City and champions Liverpool and banish any lingering relegation doubts.

Veteran Glenn Murray was handed a rare start for the visitors, while top scorer Maupay also returned as part of six alterations made by Graham Potter following the 5-0 thrashing by Pep Guardiola’s City.

The recalled strikers combined to devastating effect for a simple early opener.

Tariq Lamptey’s throw-in from the right was flicked on by the unmarked Murray, allowing Frenchman Maupay time and space to drill home left-footed and claim his 10th goal of the season.

Maupay’s strike meant he became only the second Brighton player after 36-year-old Murray to reach double figures in a Premier League season.

Southampton had earlier threatened when makeshift right-back Pierre-Emile Hojbjerg stung the palms of Mathew Ryan after engineering a clear sight of goal.

Denmark international Hojbjerg, who has expressed a desire to leave Saints, later escaped half-hearted Brighton appeals for a penalty after his challenge led to Maupay going to ground.

Saints were far from their fluent best in a disappointing first half and were correctly denied a 39th-minute leveller.

Lamptey’s blushes were spared by an offside flag after he inadvertently turned the ball into his own net having seen Ings’ initial effort diverted onto the crossbar by keeper Ryan.

Hasenhuttl reacted to the below-par display by bringing on Che Adams and Kyle Walker-Peters at half-time.

His side began brightly in the second period, with league debutant Vokins flashing a low drive from distance marginally wide.

Ings was then unfortunate to curl against the right post from the edge of the box before substitute Adams’ follow-up attempt was superbly blocked on the line by Brighton captain Lewis Dunk.

Southampton’s pressure eventually paid off with 24 minutes to go.

Ings, who remains with an outside chance of claiming the Golden Boot, was sent scampering away by Nathan Redmond’s through ball and he calmly drew Ryan before slotting into the bottom right corner.

The Seagulls were then indebted to keeper Ryan when he somehow got fingertips to a thunderous 25-yard strike from Vestergaard to turn it on to the underside of the crossbar.

It was all Southampton but Brighton substitute Yves Bissouma squandered an excellent chance to restore the visitors’ advantage against the run of play.

Albion dug in during six minutes of added time to make it six away games without defeat and, but for a remarkable goal difference swing, will be playing top-flight football for a fourth successive season.