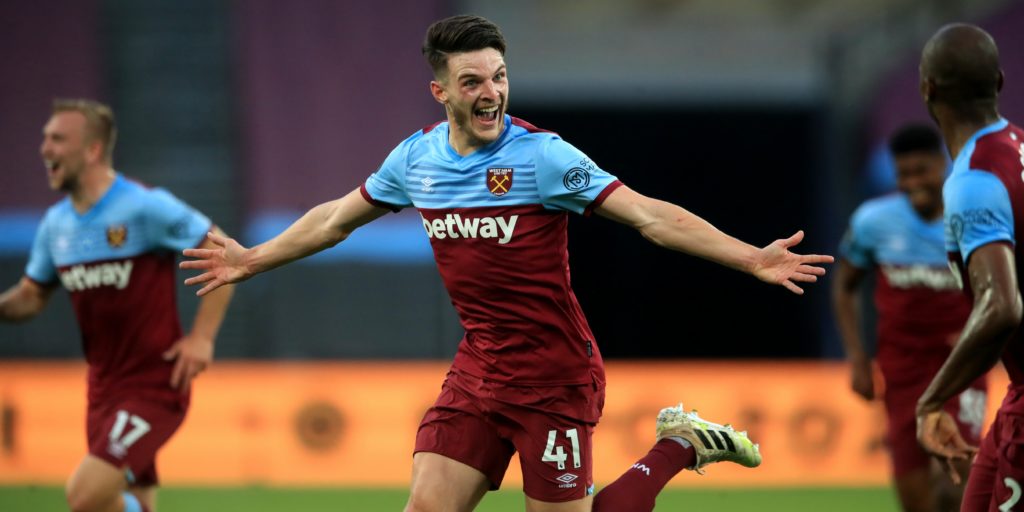 The Hammers are six points above the bottom three, three clear of Watford.

Michail Antonio scored his seventh goal in five games as West Ham all-but secured another season of Premier League football with a 3-1 win that kept Watford in relegation trouble.

Antonio gave his side an early lead, which was doubled soon after by a header from Tomas Soucek.

Declan Rice smashed in the third from distance in the 36th minute as West Ham went into the break in complete control.

Troy Deeney pulled one back for the visitors at the start of the second half, but they struggled to impose themselves on the game, despite having periods of possession after the interval.

The result leaves the Hornets just three points above the relegation zone, and facing daunting remaining matches against Manchester City and Arsenal.

With less than five minutes on the clock, Pablo Fornals found the in-form Antonio, who made no mistake when firing past Ben Foster.

Less than five minutes later, Watford’s task was made harder as Soucek headed home a second after a well-placed cross from fellow January signing Jarrod Bowen.

The visitors looked to hit back immediately, but Lukasz Fabianski was able to save Ismaila Sarr’s effort.

Watford continued to push and Soucek, having already scored, was called into action in his own box to block and then clear Tom Cleverley’s rebound effort.

Watford could be considered unlucky after the first half drinks break, after the ball appeared to hit Angelo Ogbonna’s elbow, but claims of handball were waived away by referee Martin Atkinson and VAR did not review the incident.

Just as Watford had been regaining a foothold in the match, Rice made it 3-0 with a superb 25-yard strike into the far corner.

The visitors almost pulled one back just before half-time, but Craig Dawson’s header went over the bar.

Watford started the second half brightly, and pulled one back just after the resumption. Abdoulaye Doucoure drove down the left before going for goal, but his strike rebounded off the post and into the path of captain Deeney, who tapped home.

The Hornets came close to a second with West Ham defending deeper and deeper as the half went on, Kiko Femenia sending in a cross from the left which managed to evade all players, and drift wide of the goal.

West Ham almost put the game beyond Watford just after the second half drinks break when substitute Sebastien Haller, who had been on the field less than a minute, volleyed towards goal and Foster, despite being off his line, was just able to tip the ball behind.

Danny Welbeck came closest for Watford in the final stages, but Sarr’s cross rebounded off the forward’s knee and over the bar.