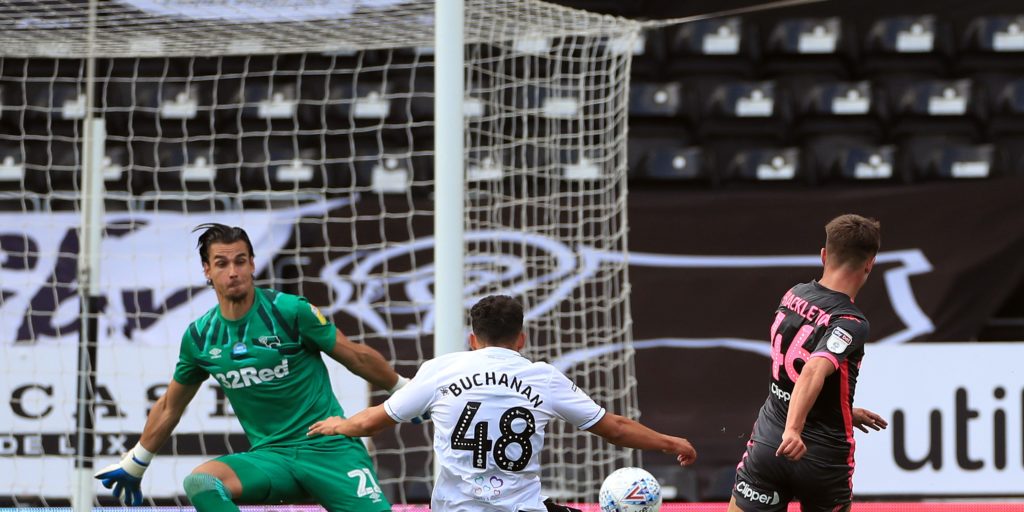 Marcelo Bielsa’s side were confirmed as Championship title winners on Saturday.

Leeds kept their Sky Bet Championship title party rolling as a much-changed side secured a 3-1 win at Derby.

Marcelo Bielsa made seven changes after his team’s promotion celebrations had started on Friday and continued into Saturday when they were confirmed as champions.

But after Chris Martin had given the Rams a second-half lead, Bielsa’s new-look side hit back through Pablo Hernandez, Jamie Shackleton and Matthew Clarke’s own goal to register their 27th league win of the season.

Derby’s players gave Leeds a guard of honour before kick-off, which could help ease the simmering rivalry between the clubs following last season’s ‘Spygate’ affair.

Tension between the two clubs had mounted further following Derby’s celebrations at Elland Road after their play-off semi-final triumph last season, but there was no apparent animosity lingering between the players.

Tyler Roberts’ shot was well parried by Derby goalkeeper Kelle Roos and Leeds went on to dominate most of the first half.

The hosts had to make an early change when winger Tom Lawrence was forced off and replaced by Jason Knight after a challenge by Gaetano Berardi.

Barry Douglas, Hernandez, Roberts again and Pascal Struijk all had shots from outside the area saved by Roos.

Leeds were then hit by injury as Berardi was carried off on a stretcher after appearing to land awkwardly in the 33rd minute. Luke Ayling replaced the Swiss defender.

The Rams had more energy about them at the start of the second half and Martin fired them ahead from inside the area in the 54th minute after some poor Leeds defending.

But the visitors’ response was almost immediate. Hernandez was given two bites of the cherry on the edge of the box and he slammed home a 56th-minute rebound after his initial shot was blocked.

Shackleton finished in style with 15 minutes left, racing on to Roberts’ defence-splitting pass to score his first senior goal for the club.

Leeds sealed the win that lifted them on to 90 points for the season in the 84th minute when Ezgjan Alioski’s dangerous cross was diverted past his own goalkeeper by Derby defender Clarke.

Leeds players gathered in the corner of the stadium after the final whistle to resume their celebrations.