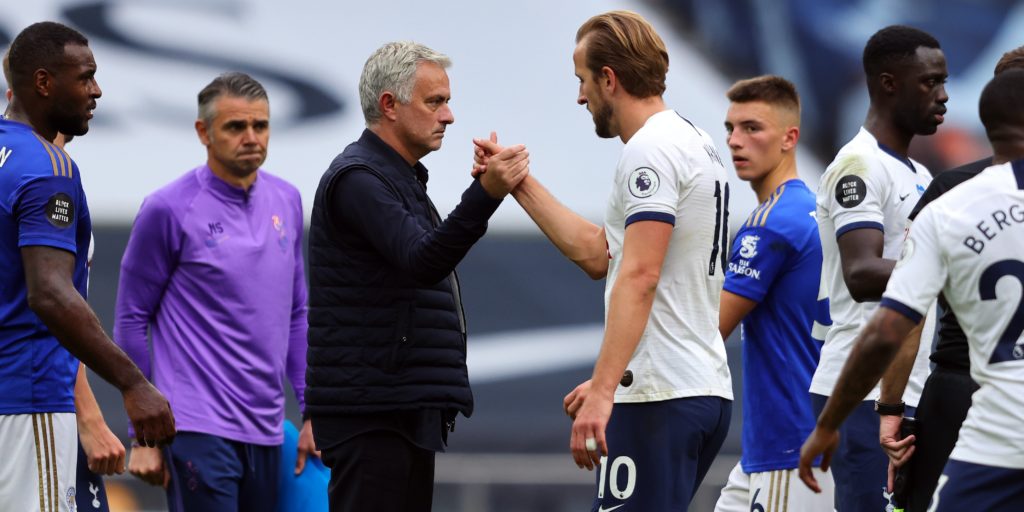 The England striker put on a masterclass to score twice in a 3-0 win over Leicester.

Jose Mourinho reckons Harry Kane’s relationship with Tottenham means he would not be as “special” playing for another team.

Kane put on a masterclass to score twice in a 3-0 win over Leicester that strengthens Spurs’ Europa League qualification hopes going into the final game of the season.

It was his sixth goal since the Premier League restart and 13th in 18 games under Mourinho, rubbishing suggestions from some pundits that he cannot flourish under the Portuguese’s style.

Kane, who has spoken during lockdown about his need for Spurs to match his ambitions for him to remain there, has scored 185 goals for the club he joined as an 11-year-old and Mourinho reckons that bond with Spurs makes him the player he is.

“I think everyone thinks he’s a fantastic player and Tottenham is so lucky to have him because he’s the player, the person and the Tottenham boy,” Mourinho said.

“Of course we want him to be happy and for him to be happy he wants victories, score goals, and I’m so happy after an incredibly difficult injury he’s coming in the direction where he’s going to end the season perfect.

“Hopefully the beginning of next season he will be even better.”

The win leaves Mourinho’s men in the top six with just one game to go.

Kane did the damage after James Justin’s early own goal and meant Spurs were 3-0 up and had the game won by half-time.

“When we scored three goals in the first half, I think the game is over.

“Then it’s just about being compact and controlling the game, so I’m very happy because it’s a lot of pressure for us.

“For them too because they have had a phenomenal season and now they are fighting to keep the position that was their position for the whole season and we are fighting until we can and see in the end.”

Leicester may have to settle for Europa League qualification after a damaging loss.

They remain level on points with and have played a game more than Manchester United, who they are now almost certain to have to beat in next weekend’s final day of the season.

It has been a disappointing time for the Foxes since the restart, but boss Brendan Rodgers says his side will be “all-in” next Sunday.

“We have had disruptions with injuries, but that aside, we have not been as consistent as what we want,” he said.

“I don’t want to be too negative, the players are disappointed but we go into the game next week with a shot of the Champions League. Our target was to arrive into the top six, which would have been a great achievement.

“If we don’t do it, of course there will be a bit of disappointment, but there will be gratitude for the effort they have put in.

“We will recover and rest and come next Sunday we will be giving absolutely everything to win.

“It’s an incredible turn up that that is the last game with so much on it, but we will be ready for it. It will be all-in.

“We are disappointed with the result but there was lots with the performance that pleased me and we will take that into next week.”