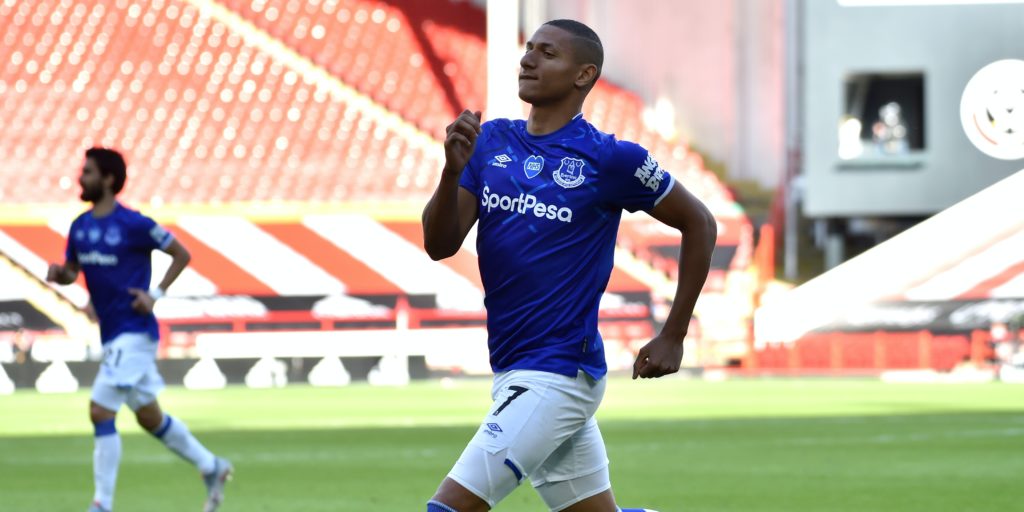 The Brazilian scored the game’s only goal in the first minute of the second half at Bramall Lane.

Defeat to Everton in their final home game of the season might have dealt a terminal blow to Sheffield United’s dreams of European football.

A seventh-placed finish in the Premier League will be enough for a Europa League spot should Chelsea win the FA Cup on August 1, but all hopes of European football at Bramall Lane for the first time in the club’s history will be extinguished if Wolves win against Crystal Palace later on Monday night after Richarlison struck in a 1-0 victory for Everton.

The Blades, who remain eighth in the standings, were the team with the incentive and the team with something still to play for prior to kick-off with Everton, dire since the restart, unable to even finish in the top half of the table.

However, Chris Wilder’s team, unchanged despite the below-par defeat at Leicester on Thursday, began the game untidily as both sides gave the ball away with frustrating regularity at the beginning of a largely forgettable first half.

The hosts then started to pin Everton inside their own half, although without working Jordan Pickford.

Carlo Ancelotti’s team got a foothold in the match and settled as the midway-point of the first half approached. A better touch by former Blade Dominic Calvert-Lewin would have seen him through on goal with just Dean Henderson to beat but he was unable to control Andre Gomes’ long pass and the goalkeeper collected the loose ball.

Chris Basham’s cross had to be slapped away by Pickford as the ball threatened to loop in at the far post.

Everton almost went in front just before half-time when Theo Walcott clipped a cross to the far post and Calvert-Lewin got above his marker but headed the ball against the post from four yards.

It turned out to be a warning sign for the Blades as right at the start of the second half Everton opened the scoring.

There were less than 60 seconds on the clock following the restart when Gylfi Sigurdsson swung in a flat cross from a free-kick on the right. Richarlison got in front of his man 12 yards out and glanced his header beyond the diving Henderson.

A fine block by 18-year-old Jarrad Branthwaite, making his first Premier League start for Everton, denied David McGoldrick the chance of an immediate reply at the other end.

Everton suddenly had more bite and urgency about their play, clearly lifted by the goal. Henderson did well to repel a deflected effort by Calvert-Lewin to keep the Blades’ deficit at just one.

Wilder’s side were trying to up the ante but, as has been the story for much of what has been a campaign of over-achievement, they lacked a cutting edge.

Everton were largely keeping their opponents at arm’s length, although Pickford almost gifted them an equaliser in the 71st minute after making a mess of John Fleck’s inswinging corner and having to slap away the ball.

Disappointingly for the hosts, it was the last time the England goalkeeper was really worked. McGoldrick scooped an effort over the crossbar with the last kick of the match and Everton held on to win for the first time in five games.