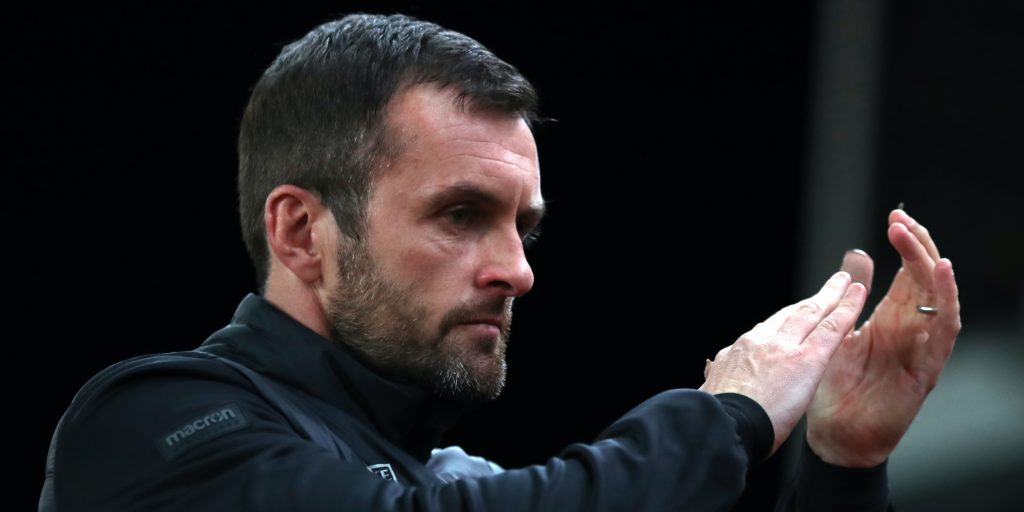 Nathan Jones got the win they needed to make sure of another season in the second tier.

Luton secured their Championship status in dramatic fashion with two own goals securing a 3-2 win over Blackburn.

Nathan Jones’ team went into the game knowing a win would be enough to ensure a second season at this level, and they managed just that on a nervy night at Kenilworth Road.

Elliot Lee volleyed well wide inside the opening 60 seconds as Luton hunted an early goal to settle the nerves.

Rovers though had a decent spell, Bradley Johnson’s 20-yard curler requiring Simon Sluga to turn the ball away from goal.

The visitors then took the lead in the 10th minute, as a corner was swung into the box and with Luton unable to clear, Adam Armstrong pounced to fire home his 17th goal of the season.

Johnson and Lewis Holtby put attempts from distance wide of the mark, before Harry Cornick’s flick header landed on the roof of the Rovers net. James Collins then failed to direct his effort on target.

However, the hosts were level though in the 28th minute when they got their first break from the opposition.

James Bree’s free kick into the area was nodded on by Luke Berry and Rovers defender Hayden Carter was there to deflect past his own goalkeeper and into the net.

Luton had the lead themselves in the 35th minute, when a corner from the left hand side was again converted by a visiting player, this time Rovers midfielder Johnson giving Walton no chance.

After the break, Pelly-Ruddock Mpanzu saw his appeals for a penalty turned down, while Joe Rothwell’s ambitious effort flew well over Sluga’s bar.

Luton had a spot-kick on the hour though as Cornick burst into the area and was sent to the ground by Jacob Davenport’s challenge, with referee Darren Bond pointing to the spot.

Hatters’ leading marksman Collins stepped up and despite slipping, buried his 14th goal of the campaign, firing straight down the middle.

Rothwell sent a decent set-piece opportunity over from just outside the box – but Blackburn were back into the contest with 15 minutes to go, Darragh Lenihan’s free-kick nodded down by Danny Graham for fellow sub Sam Gallagher to expertly volley expertly past Sluga.

John Buckley almost had Tony Mowbray’s side level instantly, his volley deflecting just wide, while Joseph Rankin-Costello put a header off target at the far post.

Home substitute Danny Hylton might have given Luton some breathing space with eight minutes to go, but – after latching on to a poor clearance – he could only drag the ball wide.

Elliott Bennett then did the same at the other end, as Rovers kept pushing for the leveller, but Town hung on to get the win which assured them Championship football for another season.