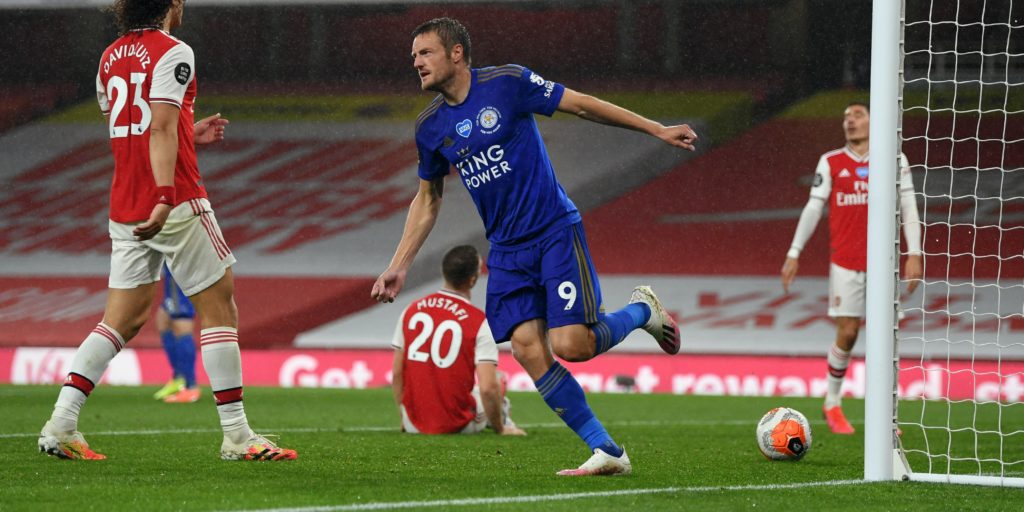 Vardy has scored 23 times for the Foxes this season.

Brendan Rodgers insists Jamie Vardy remains one of the best strikers in the world and is ready to prove it in the Champions League again.

The former England hitman is closing in on the Premier League’s golden boot ahead of Sunday’s finale.

Leicester host Manchester United aiming to return to the Champions League, having already secured a Europa League spot for next season.

They are fifth, a point behind third-placed United, knowing victory would seal a comeback to Europe’s top table after a three-year absence.

Vardy has 23 goals and Rodgers believes he is one of the best.

“When we go into Europe next season, at whatever level that he is, again he will be able to demonstrate that. I said when I came in he’s a world-class striker and thankfully next year he’ll have the chance to show that on the European stage.

“He’s a very serious guy. I think everyone thinks of him as this fun guy, dressed up as Spiderman and everything else. But you don’t become a top level striker by not being super professional.

“This is a guy who comes in every day and his mentality is to train and to work. There’s very few sessions he will ever miss.

“Behind it all he has that wonderful personality. He’s very selfless and supports the younger players, he’s good value with the senior players.

“All round he’s a top player and he knows when the ambience needs changing. There’s always a smile and when he comes into games he’s really focused. I love working with him.”

Vardy is two goals ahead of Southampton’s Danny Ings in the race to be the division’s highest scorer.

He has 103 Premier League goals in 210 appearances after reaching his century this month.

Rodgers added: “The consistency he has shown, even though he was out for a period of the season as well, has been remarkable. We want to help him achieve that as well.

“It’s an individual prize but he’s the guy who finishes off our great work for the team. We all want him to finish as the highest scorer, which would be a remarkable achievement considering his age and everything.

“For me, the age doesn’t really come into it. He’s absolutely fit as anything.”