Leon Balogun tipped to be the missing ingredient for Rangers 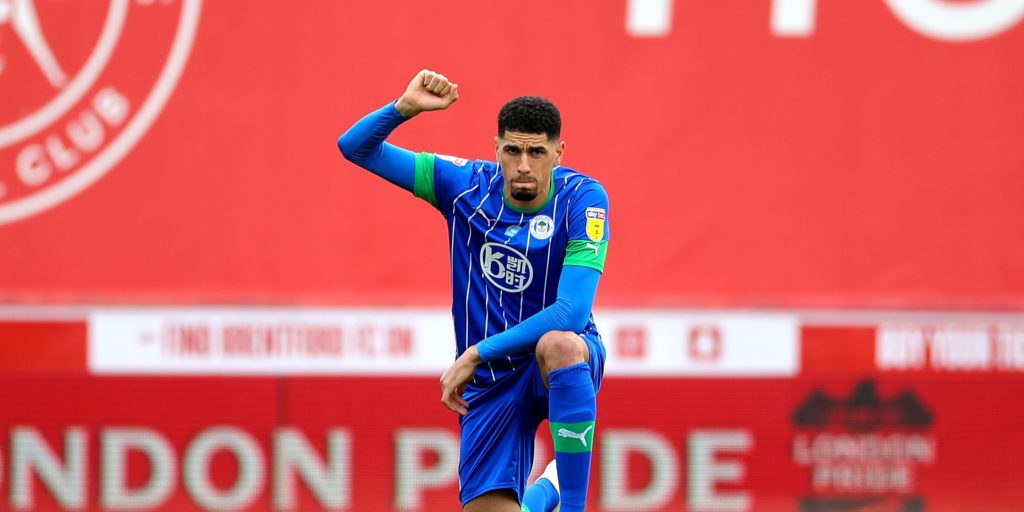 Leon Balogun has been tipped to provide Steven Gerrard with the missing ingredient as he looks to perfect his Rangers line-up next season.

The 32-year-old centre-back is reported to be on the verge of securing a two-year deal at Ibrox after leaving Wigan.

And former Latics recruitment analyst Dougie Wright is convinced Balogun is the final piece in the jigsaw Gerrard needs as he looks to halt Celtic’s quest for 10 titles in a row.

It was on Wright’s recommendation that Wigan boss Paul Cook signed the Nigeria international on a six-month loan as the clock ran down on his Brighton contract back in January.

The defender had registered just four appearances for the Seagulls in the year previous but quickly settled into the Championship.

And had it not been for a 12-point penalty imposed for going into administration, Balogun would have helped lead Wigan to a safe mid-table finish.

The severe punishment dished out following owner Au Yeung Wai Kay’s surprise decision to place the club into administration means they are instead looking at relegation, with Cook’s hopes of signing Balogun permanently also crushed.

But Gerrard is now ready to swoop as he looks for a replacement for Niko Katic, who will miss at least six months with a serious knee injury.

And Wright believes Balogun can be the man who provides the attacking impetus from deep that Rangers so badly lacked as their season came off the rails in the second half of last season.

The former Livingston analyst – who was made redundant by Wigan’s administrators earlier this month – told the PA news agency: “If you look back when we played Stoke at the DW a couple of weeks ago, he took the ball out from the right-hand side of defence, marched forward then did a pirouette on the half-way line as he went past a Stoke attacker.

“That shows how confident he is in possession and I can see why that will be a big attraction for Steven Gerrard. Is he the missing ingredient that he’s been looking for? Potentially, yes.

“Looking back, I don’t think there was a better centre-back in the Championship than Leon last season.

“He was so comfortable and absolutely strolled it. He made those around him better by how good he was.”

With 32 caps for Nigeria, the Germany-born centre-back has the kind of international experience Gerrard will be keen on as his side look to make strides again in Europe this term.

And Wright expects the defender to handle the hectic schedule as Gers prepare for a season that is likely to have little breathing space given the effects of the Covid-19 crisis.

“We brought in Leon at the end of the January window and he very quickly broke into the first team,” he said. “He hadn’t played much for a few months but he adapted to the Championship very, very quickly.

“He was very composed in possession, could play left or right side at centre-half and brings the ball out really well.

“Defensively, he’s not the most aggressive but he’s very intelligent in terms of his positioning.

“He will win most aerial duels just because he knows exactly where the ball will go.

“He has good recovery pace so you can’t really play it in behind him and in terms of his discipline, the last time I checked at the start of July he hadn’t committed a single foul by that point at Wigan.

“We were losing so many goals from set-pieces but once he came in that stopped as he was just so intelligent at winning the ball back.

“He’s a brilliant guy too, very intelligent, very articulate and popular in the dressing room. Paul Cook couldn’t speak highly enough of him.

“We had looked at bringing him in permanently before things turned out like they did at Wigan.”