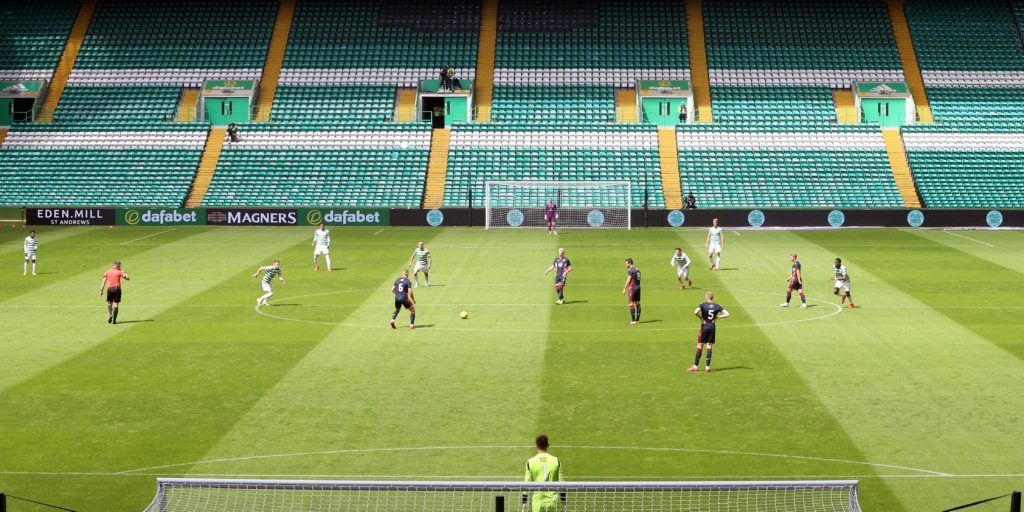 Coll Donaldson’s own goal and a Mohamed Elyounoussi strike secured victory in a closed-door match which saw crowd noise used at Parkhead.

Celtic pumped crowd noise into their stadium as they beat Ross County 2-0 in a closed-door friendly.

An early own goal from Coll Donaldson and Mohamed Elyounoussi’s smart finish gave Celtic a winning return to Parkhead as they warm up for next weekend’s Scottish Premiership kick-off.

However, there was an injury blow for manager Neil Lennon when left-back Greg Taylor could not continue after receiving treatment just before half-time.

After several friendlies in front of sparse socially-distanced crowds in France, the Scottish champions gave their players a taste of closed-door action against their Premiership rivals.

The crowd noise over the PA system was a constant backdrop and included Celtic songs, cheers for the goals and ‘oohs’ for near misses.

Lennon started with a strong team which could line up against Hamilton next Sunday after Celtic unfurl the league flag. Scott Brown was back in midfield after missing the midweek defeat by Paris St Germain with a minor injury.

There was no place for Leigh Griffiths on the bench after he missed the French trip to work on his fitness but Celtic also host Hibernian in a friendly on Monday.

Celtic kicked off following a socially-distanced huddle and the first recorded cheer came inside three minutes as the hosts took the lead. Donaldson sliced Taylor’s low cross over the head of his team’s trialist goalkeeper, Ross Doohan, the 22-year-old Celtic player who spent the last two seasons on loan with Ayr.

Christopher Jullien passed up some half-chances from set-pieces and there were also some chances for County, who started with an entirely different 11 to the team that drew 2-2 with Livingston 24 hours earlier.

While there was little trouble on the park for Celtic, some teething problems were apparent in their streaming service as more than 30,000 season-ticket holders logged on to watch the action. The club apologised to fans and later claimed the problem had been resolved.