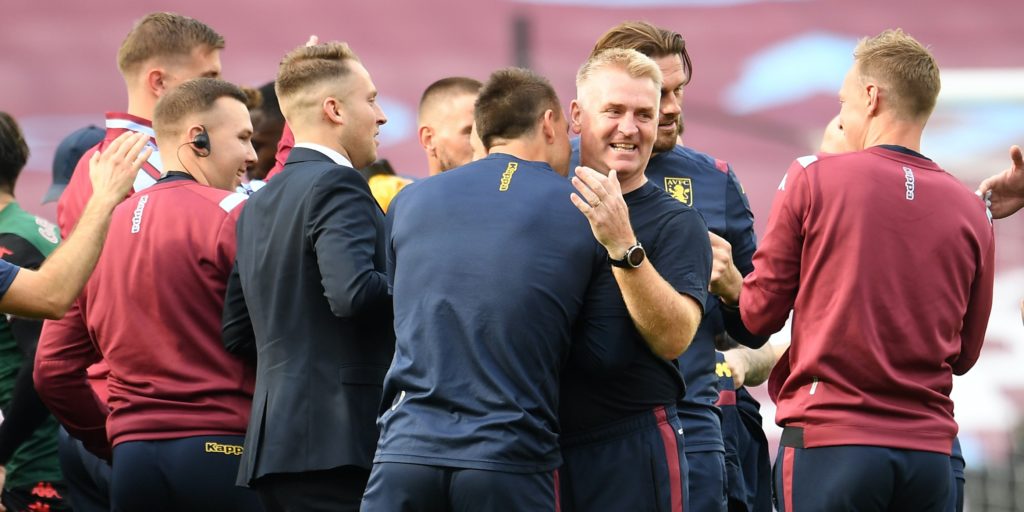 Aston Villa retained their Premier League status by a single point, having won promotion via the Championship play-offs last season.

Jack Grealish took centre stage as Villa, promoted via the play-offs during the last campaign, escaped relegation by the skin of their teeth.

The Villa captain came up with the goal which should have settled their nerves six minutes from the end.

However, moments later Grealish deflected in Andriy Yarmolenko’s shot to leave the visitors hanging on by a thread again, knowing another West Ham goal would send them down with rivals Bournemouth beating Everton.

Yet Villa, who were seven points from safety heading into their game against Crystal Palace on July 12, held on to complete their version of the great escape to stay up by a single point.

An emotional Smith, who lost his Villa-supporting father Ron to coronavirus during the enforced break, said: “It feels better than getting promoted. We had a big turnround in the summer and to stay up from where we’ve come from is a great achievement.

“I was aware of the scores elsewhere but I was more in the game. I didn’t think we were playing that well, defences were on top. They got the riot act at half-time because I wanted to win the game and put it in our hands.

“When Jack scores you think ‘That’s it we’re safe’ but a deflection made it a little bit nervous, but we saw it out well.

“I’m immensely proud and I’ve said that in the dressing room. We now look like Premier League players.

“My whole family are in the living room watching together. It’s been emotional because I lost my father to coronavirus. I’m sure he’ll be looking down on us.”

“What happens now? He comes out and gets drunk with me,” added Smith.

“Will he stay? I’m certainly hopeful, he’s contracted for another two or three years. He’s a Villa fan. He’ll be immensely proud to have scored the goal today to keep us in the Premier League.”

The Hammers had secured their safety a week earlier, meaning manager David Moyes did not have to face the agony of a winner-takes-all relegation showdown.

Moyes said: “I’m thrilled at how well our players have done. It was always going to be a tight game and thank goodness the players got us into a situation where it wasn’t what it could have been.

“Some of the performances since lockdown have been really good. We’ve set better standards, some of the young players have showed what they are capable of, we’ve got some talented players and some good experienced players.”

Prior to the match Declan Rice was named West Ham’s player of the year, and the England midfielder is expected to be the subject of transfer speculation over the summer.

However, Moyes insisted: “He’s under contract, and he’s going on holiday as far as I know. He’ll be back for pre-season with us in three weeks.”

“He’s not going anywhere, or if he is then you’ll need one of those steel vans with the cash in it.”