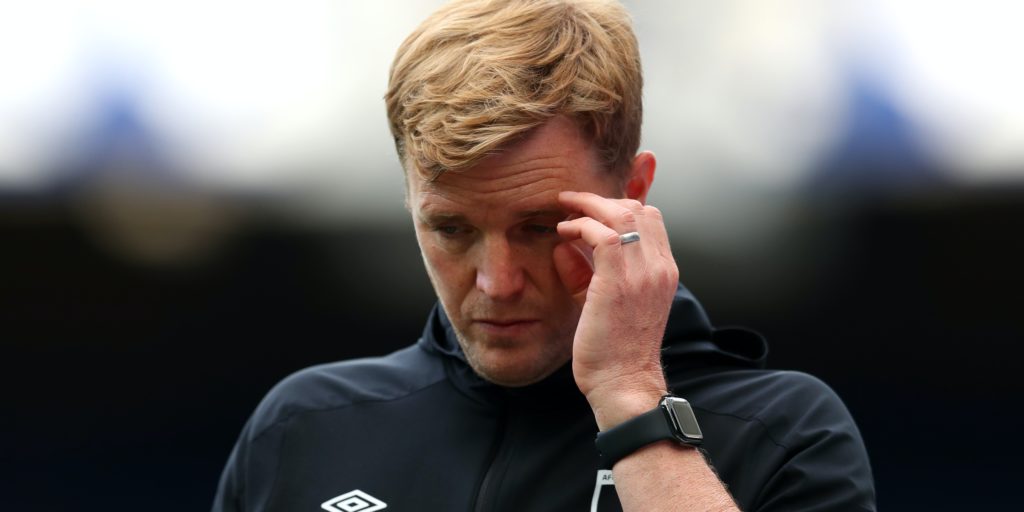 The Cherries went down despite beating Everton on the final day.

Dejected Bournemouth manager Eddie Howe admits relegation from the Premier League is the hardest moment of his career.

Goals from Josh King and Dominic Solanke – either side of Moise Kean’s equaliser – and a late effort from Junior Stanislas gave Howe’s side a 3-1 win at Everton.

However, while relegation rivals Watford lost at Arsenal, Aston Villa secured a 1-1 draw at West Ham which kept them up at the Cherries’ expense as their five-year stay in the top flight ended.

“In terms of feelings and emotions this has been the hardest moment of my career,” said Howe.

“I feel very emotional. Very disappointed, sad and dejected – loads of different things but they are difficult emotions to feel.

“I know the players are hurting. I saw the dressing room and they are all disappointed with what has happened, not necessarily today but during the season. It has not been good enough.

“I feel very sorry for our supporters tonight, especially as they have not been able to be with us.

“As the manager I take full responsibility and that is my message to them.”

Howe would not, however, be drawn on his future in the wake of relegation.

“I am determined for Bournemouth to get there, back in the Premier League. In terms of the future and what it looks like, that is for another day,” he added.

“I think the next step for for me is to speak to the owner and the directors and see where we go from here. We need to have a strong vision of the future.”

There is a very different conversation Everton boss Carlo Ancelotti will be having with his board after an 11-match unbeaten home record came to an end with another disappointing performance.

After amassing 17 points in his first eight matches in charge, Everton have taken just 13 from the subsequent 12 matches as they slipped to their lowest league finish since they came 17th in the 2003-04 season.

“Disappointed with the result. We had less motivation than the opposing team, we didn’t start too well any way. It is not how we wanted to finish the season,” said the Italian.

“When I lose I am always disappointed. The real reason was our motivation.

“They had more motivation, they were fighting to get out of the relegation zone. They had control of the game, winning a lot of duels and second balls.

“In some parts of the game we were not so bad, we had some possession. We built up from the back quite good.

“The home record is gone. We did well this season at home I think but we can do better.”