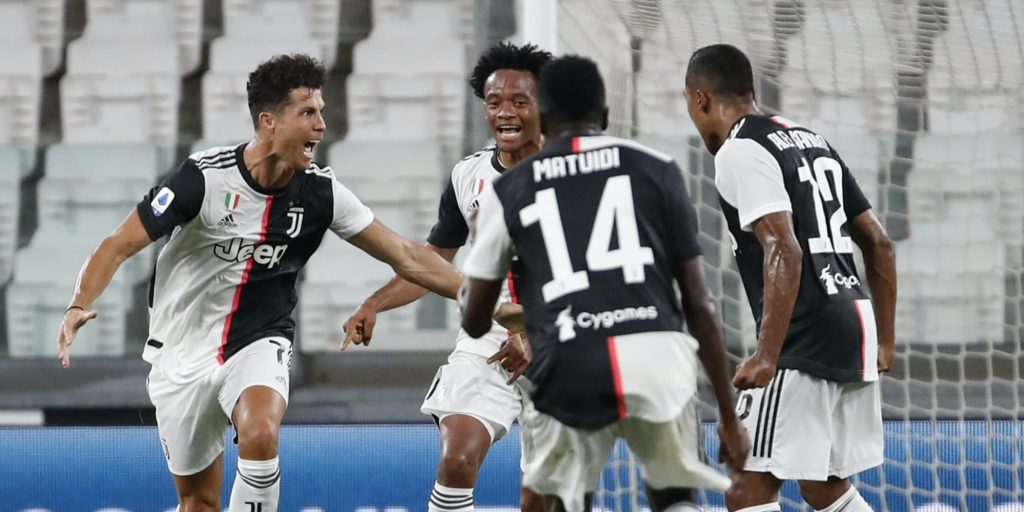 Juventus secured a 36th league championship with success over Sampdoria.

Juventus clinched a ninth consecutive Scudetto with a 2-0 home win over Sampdoria on Sunday.

Cristiano Ronaldo broke the deadlock in first half stoppage-time and Maurizio Sarri saw his team double their lead through Federico Bernardeschi with 23 minutes left in Turin before the visitors had Morten Thorsby sent off.

Top goalscorer Ronaldo had the chance to net his 32nd goal in Serie A this season when the hosts were awarded a penalty late on, but he hit the crossbar and the score stayed 2-0.

Ciro Immobile hit a hat-trick for Lazio in their 5-1 win at Verona to remain ahead of Cristiano Ronaldo in the scoring charts.

The two-time Capocannoniere scored twice from the penalty spot and Simone Inzaghi’s side remain level on points with third-placed Atlanta.

Verona went ahead six minutes before half-time, but four goals after the break for Lazio, with Sergej Milinkovic-Savic and Joaquin Correa also on target, mean they could still finish as high as second this season.

Roma were reliant on spot-kicks to help them past Fiorentina, after Jordan Veretout held his nerve on two occasions from 12 yards at the Stadio Olimpico.

Against his old club, the Frenchman opened the scoring in first half stoppage-time and added another with three minutes left to Nikola Milenkovic’s 54th-minute equaliser.

Leece’s survival bid was dealt a blow by Musa Barrow’s stoppage-time winner for Bologna in a five-goal thriller.

Fabio Liverani’s strugglers trailed by two goals after five minutes, but Marco Mancosu and Filippo Falco got them back on level terms only for Barrow to give the hosts a 3-2 victory and leave the visitors four points from safety.

Torino were held to a 1-1 draw by bottom club Spal, but it was enough to secure Serie A status for another year.

Simone Verdi put the visitors on course for three points and despite being pegged back by Marco D’Allessandro 10 minutes from time, the draw moved them seven clear of the relegation zone with only two more fixtures to play.

A second minute opener from Stefano Okaka helped Udinese leapfrog Cagliari in the table and move up to 13th after a 1-0 win in Sardinia.