Home News David Beckham: Social media would have made ‘brutal’ 1998 reaction even worse

David Beckham: Social media would have made ‘brutal’ 1998 reaction even worse 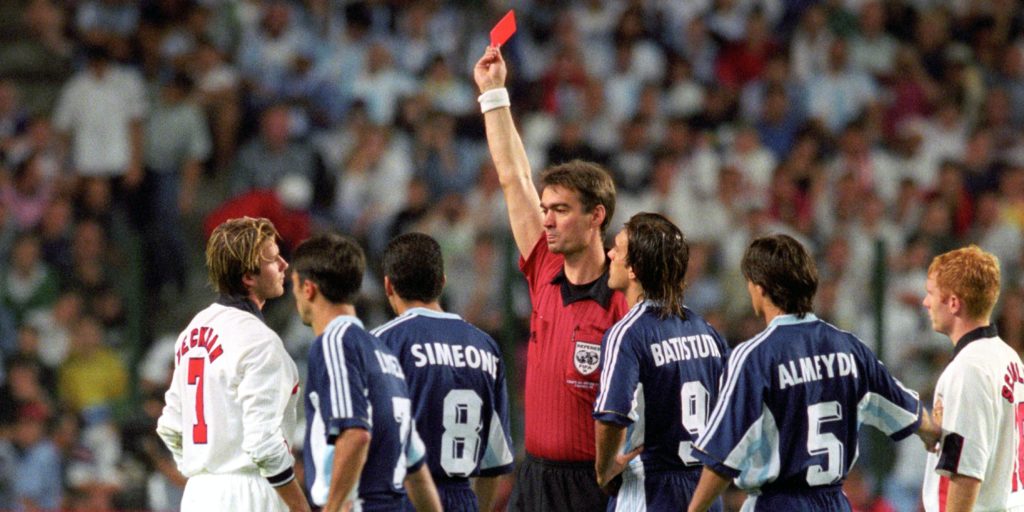 All levels of the English game have signed a joint declaration committing to make mental health a key priority.

David Beckham believes the “brutal” reaction to his red card in the 1998 World Cup pales in comparison to the potential problems facing players in the social media age.

Beckham was speaking at a mental health summit organised by the Duke of Cambridge, corresponding with the announcement that all levels of the English game have signed a joint declaration committing to make mental health a key priority as a legacy of Prince William’s ‘Heads Up’ programme.

The 45-year-old former England captain experienced a backlash after being sent off during the World Cup defeat to Argentina at the age of 23, with opposition fans barracking him upon his return to Premier League action and even burning him in effigy.

But Beckham said: “I think that when I was playing, stakes were high, but I don’t think they were as high as they are now in the game and I feel there are so many more distractions and obstacles now that can affect players from a very young age – and that’s why I feel that what you’ve (Prince William) done, what you’ve created and what is happening here with this movement is so important.

“Times have changed. If social media was around when I was going through that time in ’98, it would have been a whole different story.”

The Duke of Cambridge, who is also president of the Football Association, is continuing his mission to improve the stigma around mental wellbeing in sport.

He said: “I think this season, bearing in mind with the pandemic it’s obviously been a football season like no other, it’s actually come at quite a timely moment to have this campaign and this kind of culture declaration going on at a time where I think the country – not just obviously football but the world – is probably going to have some quite serious repercussions with mental health going forwards.”

England and Manchester City captain Steph Houghton also warned against the negative effects of social media in the women’s game.

Houghton spoke of the “unbelievable highs” and lows of his career, including missing a penalty in the World Cup semi-final against the United States last year.

Houghton said: “It wasn’t intentional missing a penalty but at the same time people make you feel like that, so I think it’s important we have that kind of awareness and to have that kind of conversation within teams for the younger generation coming up, to go ‘right, OK, social media is a great thing for a lot of things, to promote campaigns, build people’s profiles, but at the same time it can be quite hurtful, and sometimes you don’t realise people do read a tweet or an Instagram and actually it stays with you for a long time’.”

England and Aston Villa defender Tyrone Mings has set up his own academy for youngsters, focused on removing the pressures of the game.

He revealed: “I just felt like it was a really unstable place for kids to be mentally.

“I’m not saying they should come to mine rather than be at football academies, they are great pathways, but if kids ever want to be away from that and have some extra training or be in an environment where they don’t feel pressurised to win games or impress people, then that’s the kind of environment that we set up and we’ve had really good feedback.”