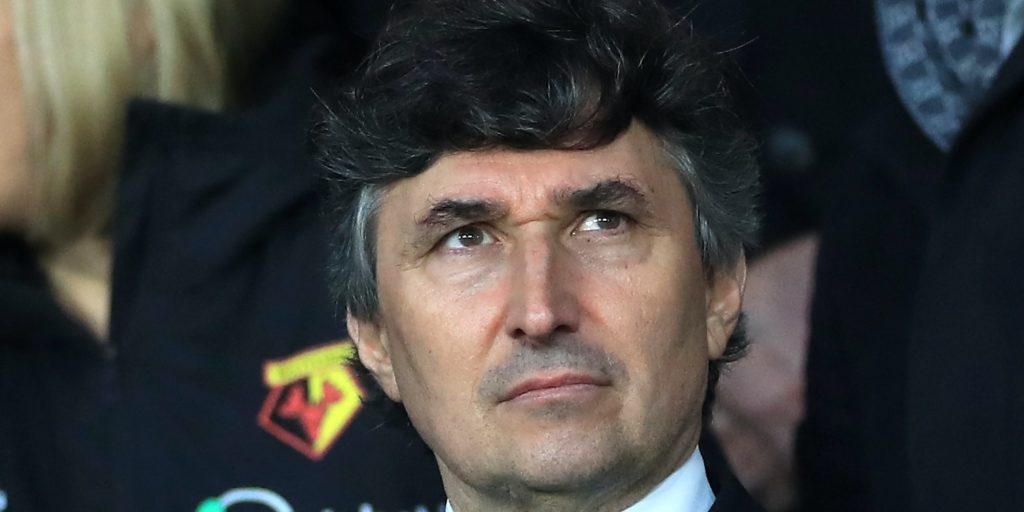 Watford owner Gino Pozzo has promised to do “everything in his power” to return the club to the Premier League.

The Hornets lost 3-2 at Arsenal on Sunday as their five-year stay in the top-flight came to an end with relegation confirmed.

Pozzo, along with chief executive Scott Duxbury, came under fire from some quarters for the decision to sack head coach Nigel Pearson with just two fixtures remaining.

Hayden Mullins was put in temporary charge for what proved to be defeats against Manchester City and Arsenal, Watford finishing 19th following a dramatic final day.

In a joint statement issued on the club’s website on Monday afternoon, Pozzo and Duxbury reaffirmed their commitment to Watford and gaining a speedy return to the Premier League.

“There is obviously huge disappointment at losing our Premier League status, we cannot pretend otherwise. Every club wants to be playing at the highest possible level,” their statement read.

“We have always said we are here for the long-term and we will not allow this one moment of great disappointment to stop the continued development of this club over the next eight years and beyond.

“There will be lessons learned and changes made but, from today, we move forward. We have to accept a different challenge.

“Rest assured, we will do everything in our power to take Watford Football Club back to the Premier League, something we all believe we can achieve.”

The statement confirmed that fans should be ready to see the playing squad overhauled as Pozzo and Duxbury also pointed the progress off the pitch since the former took sole charge of the club in 2014.

“What league we play in, however, does not define the football club,” it read.

“We will not allow the core values of Watford FC to become diluted simply because we are not playing in the Premier League.

“Everything we have achieved as a club over the past eight years should not be forgotten.

“The fact we have transformed Vicarage Road Stadium and built a club of true substance – with links to the community that are the envy of many – is a source of great pride.

“We will make changes where the team is concerned and those changes will make us stronger, ready to face the challenges that lie ahead and rekindle the passion that has always been a hallmark of this great club.”