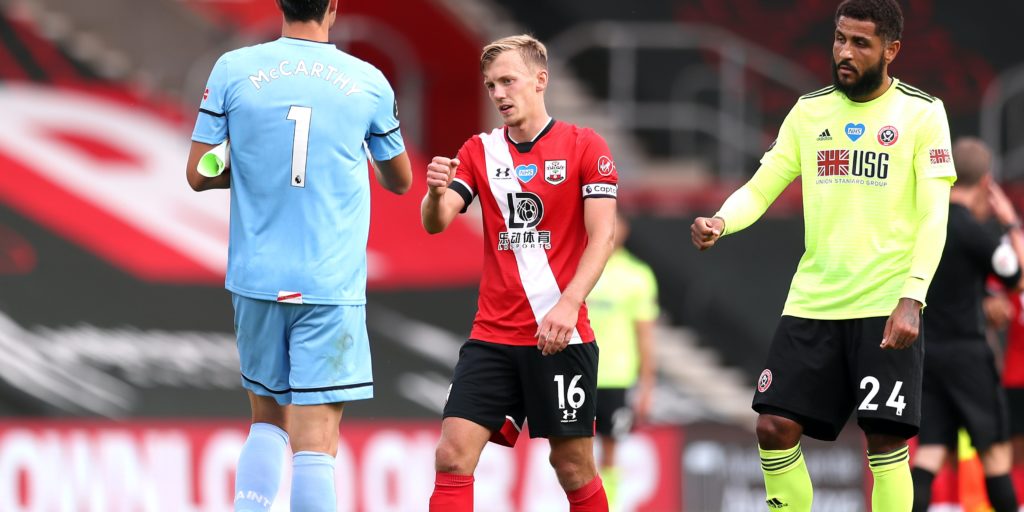 Saints finished the season in 11th and were one of the stars of ‘Project Restart’.

James Ward-Prowse was delighted by the way ever-developing Southampton came from behind against Sheffield United to head into next season on a high.

The Premier League campaign belatedly came to a close on Sunday after the coronavirus suspension saw remaining matches squeezed into a hectic, truncated period.

Saints finished the season in 11th and were one of the stars of ‘Project Restart’, winning five of their nine matches and falling to just one defeat as relegation fears were emphatically extinguished.

Ralph Hasenhuttl’s men came from behind to beat surprise package Sheffield United 3-1 at an empty St Mary’s on Sunday, showing steel and skill that skipper Ward-Prowse felt underlined their progress.

“It’s a sign of our development as a team,” the midfielder said.

“I think earlier in the season we wouldn’t get back into that game. We’d probably be a little bit slower with the ball, but there’s the belief in what we’re doing that we can get back into it.

“We don’t let our heads drop and I think that’s a really important thing as a team, and we’re growing all the time.

“It’s pleasing that in the last few weeks we’ve got back into games, even if we have gone a goal down, and that’s a real positive sign for us.

“Coming back from the restart, I think everybody was a bit unsure as to how it would go, but we set the tone with the win against Norwich and you can feel a real development around the team at the moment.

“I think we’re very good without the ball, but with the ball we’re showing really good, positive signs.

“We knew going into today that we were six unbeaten and we wanted to make sure we continued that and took some momentum into next year.”

The Blades will enjoy the month-and-a-half break as much as anyone, having fallen just short of European qualification in a superb first season back in the top flight.

United boss Chris Wilder said his players looked exhausted in defeat at St Mary’s, but finishing ninth with 54 points is certainly not to be sniffed at.

“The players have given me everything, absolutely everything, but of course we also need to move forward,” Wilder said.

“We’ve got to move forward because that’s what everyone else will be doing.