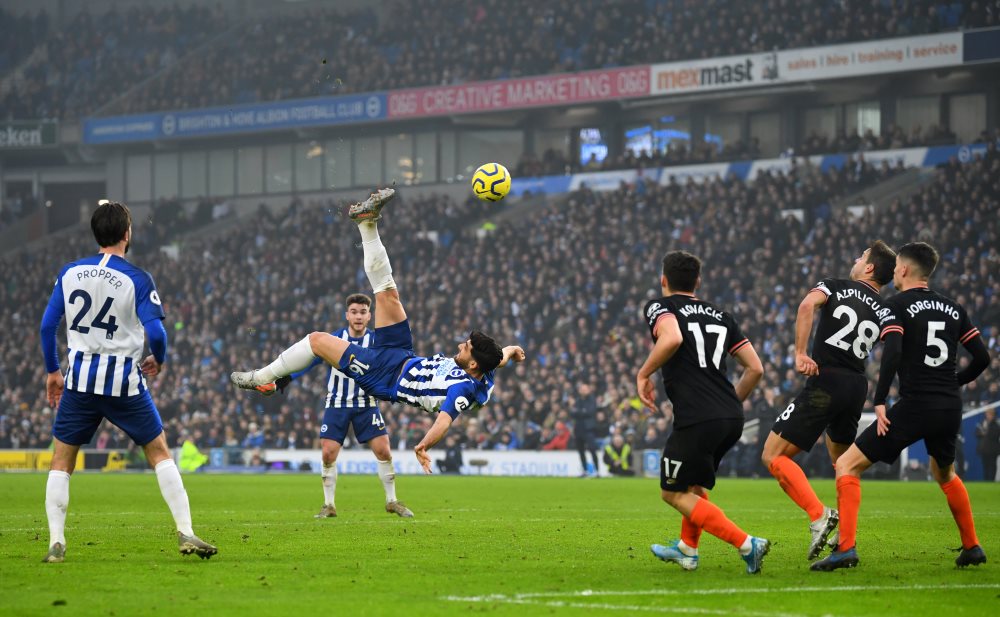 The new year and decade did not stop Liverpool's march towards the Premier League title, as another perfect month saw the Reds establish a 19-point lead.

The month began in spectacular fashion, as the opening game of 2020 arguably yielded one of the Premier League goals of the decade, with Alireza Jahanbakhsh’s spectacular late equaliser salvaging a point for Brighton against Chelsea.

New Year’s Day also saw Mikel Arteta secure his first win in charge of Arsenal, as the the Gunners triumphed 2-0 at home to Manchester United, while David Moyes had an immediate impact at West Ham, as his first match at the helm ended in a spectacular 4-0 victory over a Bournemouth side that were hurtling towards the relegation zone.

Liverpool began what was a busy month for Jurgen Klopp’s side with a victory over Sheffield United, while they recorded four more wins during the month, including against Tottenham and Man United to end January with a surely unassailable lead at the top.

The Reds were able to establish such a healthy advantage, as Manchester City dropped points at home to Crystal Palace, while Leicester were surprisingly beaten by both Southampton and Burnley.

Fourth-place Chelsea were also struggling for consistency after surprisingly losing at Newcastle on January 18, but they remained six points clear of the chasing pack, which was headed by Man United even though Ole Gunnar Solskjaer’s side lost three of their four league games during the month.

At the other end of the table, Watford began 2020 how they had ended 2019, as Nigel Pearson’s side beat Wolves and Bournemouth, although a last-minute defeat to Aston Villa at the end of the month meant the Hornets finished January back in the relegation zone in 19th-place.

However, Watford’s tally of 23 points was the same as the two sides directly above them in the standings, Bournemouth and West Ham, while Brighton and Aston Villa were only two points better off.

Indeed, the relegation battle was shaping up to be too close to call, although not necessarily for bottom-club Norwich, who had slipped six points adrift of safety following a run of just one win from 11 games.

Unsurprisingly it was Jahanbakhsh’s New Year’s Day wonder strike that clinched the goal of the month accolade for January, while Klopp picked up the managerial award for the fifth time in the space of six months.

Manchester City forward Sergio Aguero was named player of the month, as he scored six times during January, including a hat-trick in the Citizens 6-1 away thrashing of Aston Villa.