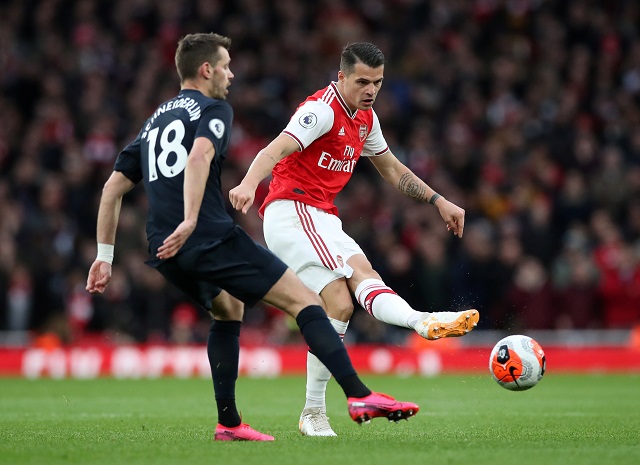 Granit Xhaka admits he would have to “think twice” if he was offered the Arsenal captaincy once again.

The Swiss midfielder had a much-publicised bust-up with the Gunners fans in October after being substituted against Crystal Palace in their 2-2 draw.

Fans sarcastically cheered when his number went up on the fourth official’s board and Xhaka responded angrily by throwing his shirt off and storming down the tunnel.

The unsavoury incident led to an exodus from the first-team under then-manager Unai Emery before he was brought back a month later for Arsenal’s Europa League group match against Frankfurt.

Emery was sacked a day later and, by this point, Pierre-Emerick Aubameyang had been named as the new club captain.

Mikel Arteta replaced his fellow countryman as manager and Xhaka has been restored to a regular first-team role under his stewardship.

Despite reports linking him with a move to Hertha Berlin in January, the 27-year-old has knuckled down and says he is “happy” once again in North London.

However, when quizzed over the future captaincy role at the Emirates, Xhaka appeared reluctant to fully put himself forward.

“If one day the club asks me about the armband, I have to think twice,” he told Standard Sport. “There was a moment, because it was not easy for me and my family. I hope people understand this.

“But I think I showed my character. I am not a guy who runs away. I always say to the club, ‘When I [am] here, I am ready to give everything’. It was like this always. I train very hard and that things turned around is the key. This [has given me] the most happiness.”

Xhaka has played 26 times for the Gunners this season as their disappointing campaign took a turn for the better on Sunday.

Two goals from Aubameyang and one from youngster Eddie Nketiah were enough to beat a stubborn Everton 3-2 at the Emirates.