Kolasinac injury could be blessing in disguise for Arsenal 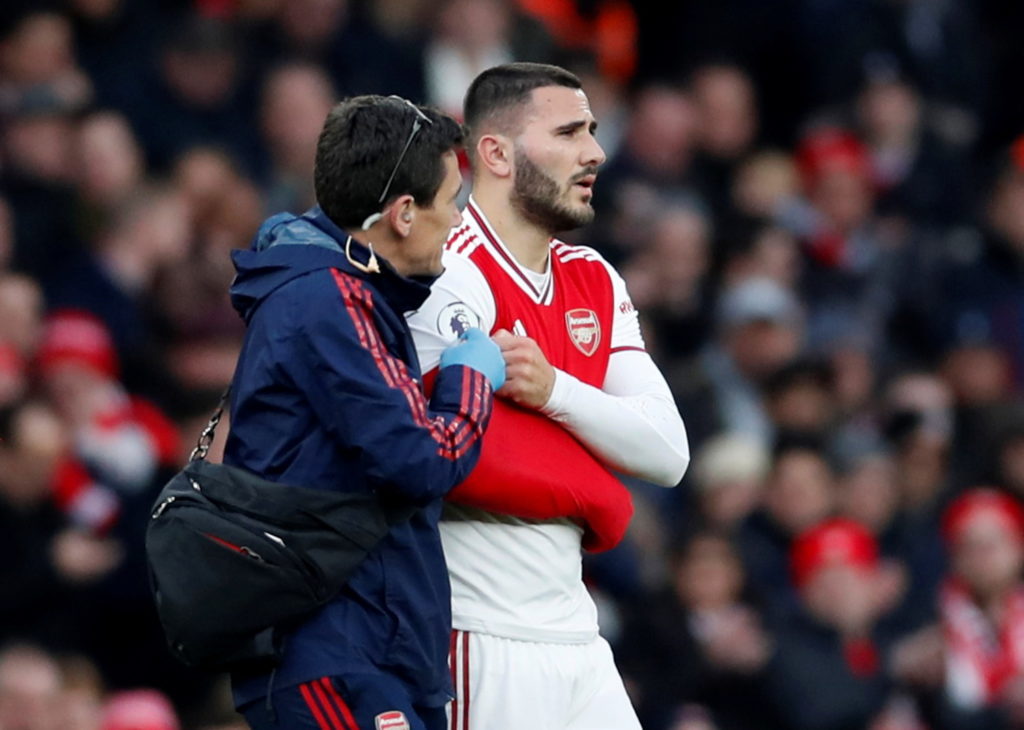 Arsenal have confirmed left-back Sead Kolasinac is set for a spell on the sidelines after suffering a “significant shoulder injury”.

Kolasinac was forced off after just 18 minutes on Sunday as Arsenal went on to beat Everton 3-2 at the Emirates.

The 26-year-old came back into the starting XI after a short spell out with a thigh issue but his return was short-lived following a clash with Everton defender Djibril Sidibe.

After receiving treatment on the field, Kolasinac made his way down the tunnel with his shirt utilised as a makeshift sling.

Arsenal added that Kolasinac “will undergo further specialist assessments during this week”.

His injury leaves Arteta extremely short on options in the left-back berth as summer signing Kieran Tierney is also out with a dislocated right shoulder.

Tierney’s time in north London has been heavily disrupted by injury problems and Arsenal say he is set to be “back in full training by the end of February”.

Cedric Soares, who joined from Southampton in January, is yet to make an appearance due to a left knee problem and should return to training by the end of this month.

In the meantime, Bukayo Saka looks set to be handed a run of games for the Gunners and could potentially make that position his own.

The full-back role has become much more important in the modern game due to a reluctance to play two strikers at most clubs.

Arsenal fall into that category and Arteta has shown a preference for the 4-2-3-1 with his full-backs getting forward to add further pressure in the attacking third.

Arteta wants all of his players to be comfortable in possession and utilising a forward-thinking player – Saka is traditionally a winger – at full-back can have huge advantages.

Trent Alexander-Arnold is regarded by many as the top full-back in the Premier League at this present time, some even suggesting he could be the best in the world, due to his ability to influence play in the final third.

Bayern Munich youngster Alphonso Davies is a prime example of a player to have been moulded from winger to full back and he tore Chelsea apart in the Champions League on Tuesday.

So far, Saka, who grabbed an assist when coming off the bench in Sunday’s win against Everton, has impressed when given opportunities with Arsenal this season, making 17 Premier League appearances with 11 of those coming from the start.

Another game ✅ Another win 💯 Another assist 🔥 Signal strong as ever🤝📞 @EddieNketiah9 pic.twitter.com/a6zpxsBWa2

He has excelled down the left flank, with his pace and trickery proving to be a thorn in the side of defenders.

Kolasinac is vastly more experienced than the teenager but Saka is clearly more mobile and appears to be a better fit for Arteta.

The academy graduate has represented England through the age groups at youth level but is still some way from forcing his way into Gareth Southgate’s plans.

The likes of Luke Shaw, Ben Chilwell, Danny Rose and even Brandon Williams would be considered ahead of the 18-year-old in the pecking order, however, with more experience he could eventually put himself in the frame.

Sometimes being thrown in at the deep end can be beneficial and currently, Saka seems to be thriving at the highest level.