Shaqiri to stay put as Liverpool cover all bases 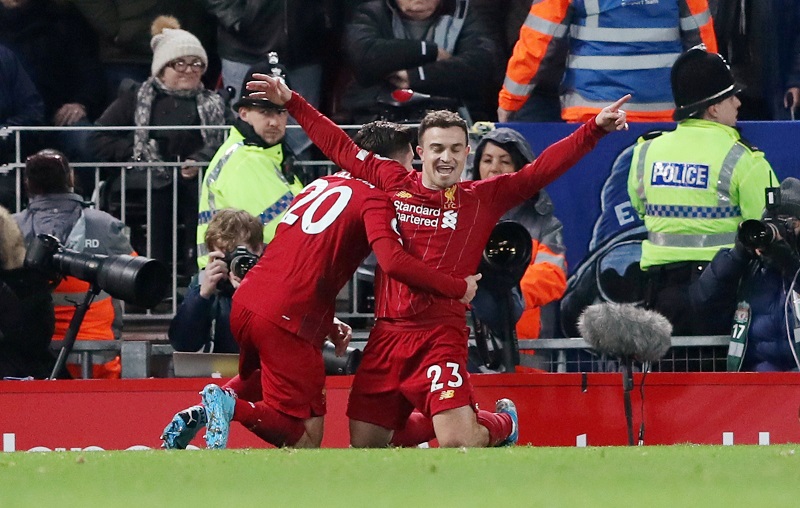 Winger Xherdan Shaqiri will not be leaving Liverpool on loan during the January transfer window, according to reports in the British media.

The 28-year-old winger has barely featured for the Reds this season, making six Premier League appearances but only two starts, while he has found the back of the net on just one occasion.

Having played only 174 minutes of top-flight football, it seemed he might be on his way this month, with Italian side Roma linked to the Switzerland star.

The Eternal City outfit, who are currently fifth in the Serie A standings, were reportedly keen to take the former Stoke City wide man on loan until the end of the campaign.

However, a report in the Mirror claims Jurgen Klopp will not sanction the switch after allowing loan exits for Rhian Brewster and Nathaniel Phillips.

Takumi Minamino’s arrival means Shaqiri is probably further down the Anfield pecking order and it would be a major surprise if he is not sold during the summer window.

Liverpool will refuse to let any of their first team squad players leave, as Jurgen Klopp focuses on title glory.

The club has made clear to Xherdan Shaqiri’s agent that there is NO chance of him leaving in the January window.https://t.co/aUEBDM2EVL

However, for now, the German tactician wants to keep the experienced schemer in the ranks to ensure he has cover for injuries during the second half of the season.

Roma will be disappointed as they continue to battle with Atalanta for fourth spot in the Italian top flight and could have done with the lively midfielder in the ranks.

Shaqiri came on as an injury-time substitute as the Merseysiders completed a 1-0 victory over Spurs in north London on Saturday to make it 12 consecutive Premier League wins and an incredible 20 victories out of 21 games this term.

Having come through the Spurs test, next up for the north-west giants is Sunday’s visit of Ole Gunnar Solskjaer’s Manchester United, with league leaders Liverpool currently 14 points clear of United’s rivals Manchester City with a game in hand.