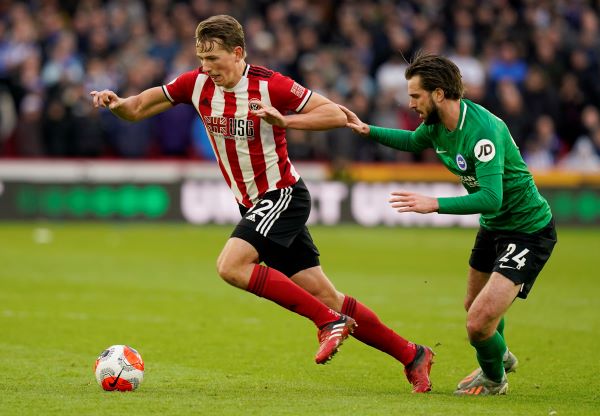 Sheffield United have given Sander Berge a "hefty" personal training programme in a bid to get him further up to speed for the Premier League's resumption.

Berge will spend the coming weeks working hard on his strength and conditioning at his new home near the Peak District while also using the time off from football to fully settle into life in England.

The 22-year-old has just moved into a brand new apartment in one of Sheffield’s most fashionable neighbourhoods, according to VG newspaper in a story that details what several Norwegian internationals are doing during the stoppage.

“I really think it’s nice to be able to focus on myself and get myself in the apartment – I am trying to create a proper home,” said Berge, who is currently waiting for a sofa to be delivered.

The midfielder has had an intense start to 2020 with a big-money move to the Premier League following his impressive displays in the Champions League with Racing Genk.

But he is yet to last the full 90 minutes in a Premier League match, coming off before the end in three of his four appearances and starting on the bench in the other.

“We received a nice offer from Sheffield United, close to what we wanted for him [Berge]. Not far off €20m, but it wasn’t the club he wanted. Playing the Champions League, that’s something.”#twitterblades #sufc pic.twitter.com/0AQS4GHOUD

Berge won’t be the first overseas arrival to the English top flight to take time to find his feet in one of the most physically demanding leagues in the world.

The Blades were actually training as recently as last Friday and played a behind-closed-doors match the day before that as manager Chris Wilder attempted to keep his squad ticking over.

The emphasis now is on personalised fitness programmes with Berge admitting to VG that he has been given a “hefty” schedule of workouts to complete by the Blades’ fitness team.

Team-mate Chris Basham said on Wednesday that “there’s no hiding place for the lads” after United’s squad were sent home from training with training plans and Wattbikes.

Wilder and his coaching staff can monitor the players’ heart rates through special trackers and have also sent weights to each member of the squad to ensure they have all they need to stay in shape.

In Berge’s case, that could see him put on a bit more upper-body strength in time too.