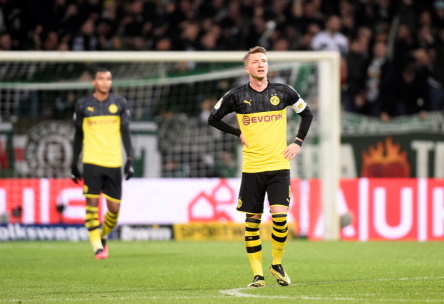 The 30-year-old faces up to a month on the sidelines after suffering a muscle injury on Tuesday night. Reus went down injured and was replaced by Emre Can during the 3-2 defeat to Werder Bremen in the DFB-Pokal.

Dortmund have now released an official statement confirming he is set to miss the upcoming games with PSG, as well as league matches against Bayer Leverkusen, Eintracht Frankfurt, Werder Bremen, Freiburg and Borussia Monchengladbach.

It reads: “BVB captain Marco Reus suffered a muscle injury in the DFB Cup. According to the current status, he will return to training in about four weeks. Get well soon, Marco!”

Reus’ absence is sure to be felt by Dortmund, with the Germany international making 26 appearances across all competitions this season. He has scored 11 goals in the league and also grabbed five assists to help Dortmund move to within three points of table toppers Bayern Munich.

Dortmund play their first leg against PSG on February 18 before the return match on March 11 and coach Lucien Favre may need to change his tactics to progress into the next round.

Les Parisiens won five of their six games to advance into the last 16 and with Neymar, Angel Di Maria and Kylian Mbappe in their ranks, they will fancy their chances.

Der BVB can now focus on the league and the Champions League after their cup defeat to Bremen, with Favre admitting his team paid the price for a slow start.

He told the club’s official website: The first-half performance was poor. We were lacking tempo in our play. We seemed to be late to every ball and come out worse in every tackle. Getting knocked out is very disappointing for all of us.

“It’s a real shame. We had three or four big chances towards the end and could well have ended up achieving our objective.”