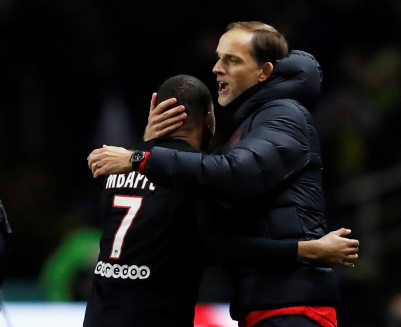 Thomas Tuchel praised his Paris Saint-Germain players as they opened up a 15-point gap at the top of Ligue 1 with victory at Nantes.

The Parisians left themselves open to heavy criticism as many of the players attended a birthday bash for PSG team-mate Neymar just 48 hours before the game.

However, it had no effect on the performance in Nantes as they wrapped up a 2-1 win thanks to goals from Mauro Icardi and Thilo Kehrer.

Neymar was absent, carrying the effects of a rib injury picked up at the weekend, but he was not needed as Tuchel’s men picked up another three points on their way to yet another Ligue 1 crown.

They did have a bit of a scare as Moses Simon pulled a goal back for the home side to set up a tense finish, but PSG saw the game out to make it 10 wins from the last 11 league games.

Apart from the last 20 minutes of the game, Tuchel was delighted with the performance and felt they fully deserved the three points.

“The final 20 minutes, it’s our fault that it was tight, after an error, but it can happen,” the German tactician said. “Then you need to react and adapt to the circumstances.

“The team did that and then we had a bit of luck, but also lacked some luck because we had several chances to score the third goal and put the game to bed. But that wasn’t possible today. And honestly, I am very happy.”

Marseille remain 15 points behind PSG but do have a game in hand.