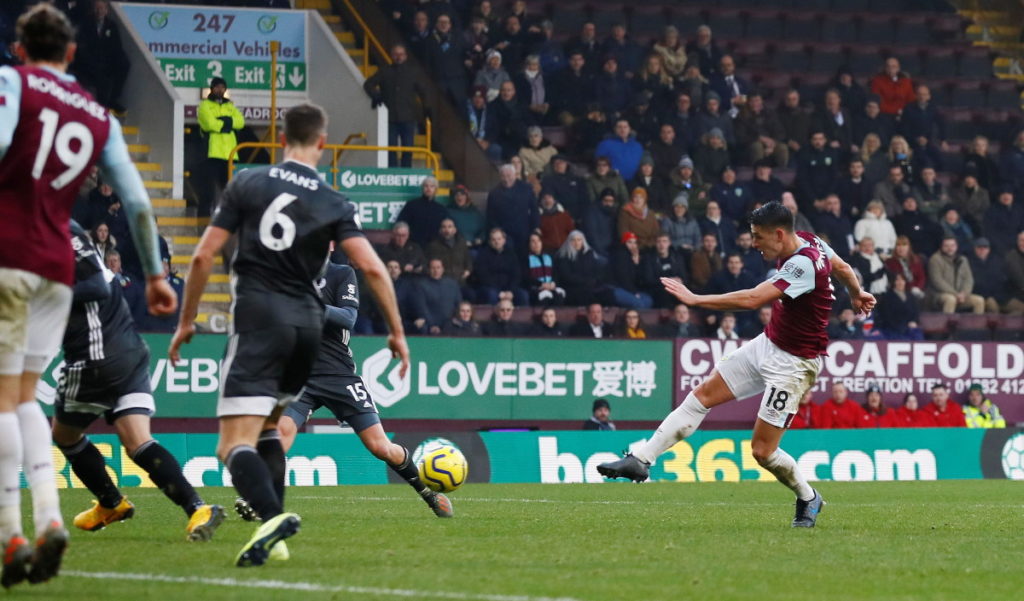 Second-half goals from Chris Wood and Ashley Westwood saw Burnley fight back from a goal down to beat Leicester 2-1.

Harvey Barnes had given the Foxes a first-half lead and Jamie Vardy saw a penalty saved with the score at 1-1 after the restart.

The Clarets went into the game seeking to arrest an alarming run of form after seven defeats in their last nine Premier League games, while Leicester knew a win would see them move level on points with Manchester City in second spot.

The visitors almost made a perfect start after a quick attack but Barnes hit his effort straight at Nick Pope in the Burnley goal.

Vardy set James Maddison up soon after but a heavy touch let the midfielder down as Leicester continued to put their hosts under pressure.

Burnley began to grow into the game and, as ever, looked a threat from set pieces but Leicester took the lead on 33 minutes.

Dennis Praet dispossessed Jack Cork, with a VAR check confirming he won the ball fairly, and sent Barnes on his way as he atoned for missing his early chance by firing the ball into the net.

The Clarets were level 10 minutes after the restart thanks to Wood’s poacher’s instinct. Ben Mee had headed towards goal from a corner, Kasper Schmeichel saved but could only palm it out to Wood, who slotted home into an empty net.

On 66 minutes Leicester had a chance to reclaim the lead when Mee brought down Barnes in the area. Vardy, who had to wait a long time due to a VAR check, produced a poor effort from the spot and Pope guessed correctly and made the save.

The Clarets completed the turnaround with just over 10 minutes of normal time remaining as Jonny Evans could only half clear a Charlie Taylor cross. The onrushing Westwood was quickest to the ball as he smashed home his first ever Premier League goal at Turf Moor.

The win sees Burnley move up to 14th place and they are now five points clear of the drop zone, while Leicester remain third with 45 points from 23 games.