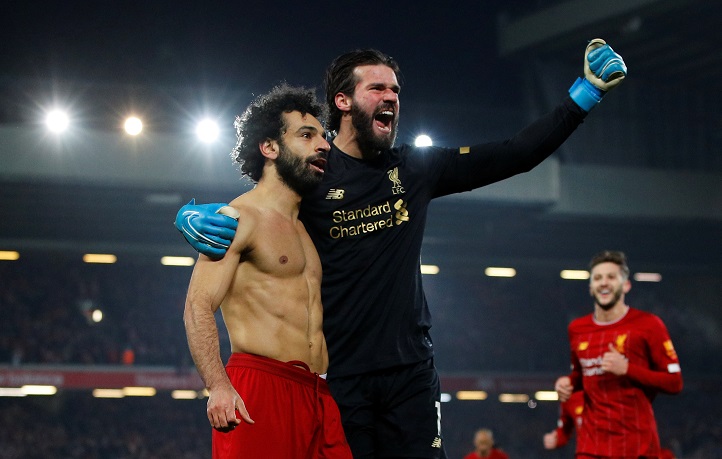 Liverpool have moved 16 points clear at the top of the Premier League table after Sunday's 2-0 home victory over arch rivals Manchester United.

Liverpool were on a seven-game winning run in all competitions heading into this contest and they managed to extend that stretch to eight matches as they overcame a United side lacking any real penetration.

The Red Devils started brightly, enjoying some early possession, but they were made to pay for some poor defending at a corner in the 15th minute when Virgil van Dijk powered a header in from six yards out.

Jurgen Klopp’s men seemed to settle after taking the lead and they thought they had a second 10 minutes later when Roberto Firmino curled an effort into the far corner, but VAR checked a possible foul by Van Dijk on David de Gea in the build-up and the goal was chalked off.

The video assistant referee was then involved again in the 36th minute when Georginio Wijnaldum finished off a nice move from close range, but his strike was rightly ruled out after he strayed offside.

Senegal international Sadio Mane was the next to be denied right on the stroke of half-time when his powerful shot from inside the area was superbly saved by the inside of De Gea’s right leg.

Into the second half and Liverpool should have doubled their lead minutes after the restart when Andy Robertson teed up Mohamed Salah from eight yards out, but the Egyptian fluffed his lines after failing to sort his feet out.

Jordan Henderson then saw his effort from the edge of the box tipped onto the post by De Gea before Mane scuffed an off-balance effort wide of the far post when breaking into the penalty area.

With Liverpool failing to put the game to bed, United started to grow in confidence and they should have got back on level terms when Anthony Martial got on the end of Andreas Pereira’s ball into the box, but the Frenchman went for power instead of accuracy and fired over.

Brazil international Fred, who was arguably the Red Devils’ best player, then let rip from 25 yards out but Alisson was up to the challenge, parrying the effort behind for a corner kick.

Liverpool did wrap up the points in the 93rd minute when Alisson played a long ball downfield to Salah, who held off Dan James to drive into the box and finish through the legs of De Gea.

The Reds are now 16 points clear at the top with a game in hand on second-placed Manchester City, while United remain fifth having missed the chance to cut the gap to Chelsea in fourth.