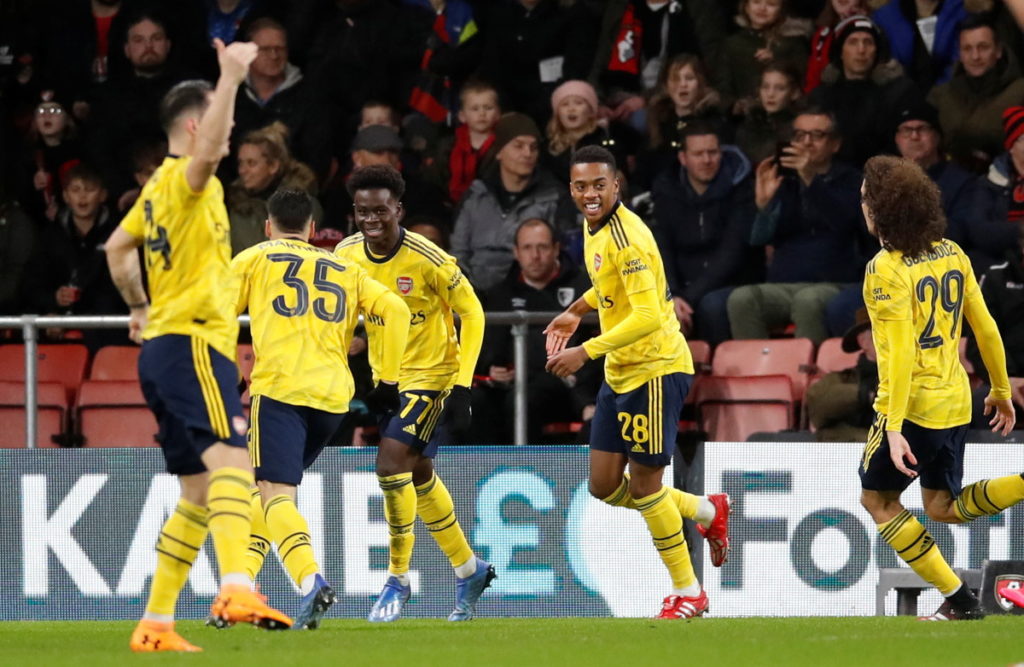 First half goals from Bukayo Saka and Eddie Nketiah saw Arsenal claim a 2-1 win at Bournemouth in the fourth round of the FA Cup.

It looked as if the Gunners were coasting towards a place in the fifth round until Sam Surridge struck in injury time with his first goal for the Cherries but the visitors held on.

Arsenal boss Mikel Arteta made five changes to the side that drew 2-2 with Chelsea last time out and Cherries counterpart Eddie Howe opted for six changes.

The north London outfit looked to impose themselves on the game from the off and within five minutes their youthful attack managed to break the deadlock.

Joe Willock got away from Dan Gosling and carried the ball to the edge of the area before picking out Gabriel Martinelli.

The Brazilian teenager slid the ball into the path of Saka and his first touch gave him a difficult shooting angle but he finished exquisitely by rifling his effort in off the underside of the crossbar. Cherries keeper Travers appeared to get a slight touch, but the pace on the shot gave him no chance of keeping the ball out of the net.

Arsenal were totally dominant as Bournemouth offered virtually nothing going forward and on 26 minutes they doubled their advantage. Willock again played a key role as he found Saka on the left and the scorer of the opener turned provider as his low cross was converted from close range by Nketiah, who was handed his first start since returning from a loan spell at Leeds.

Bournemouth just weren’t in the game in the first half and were lucky to only be two down at the interval but they did improve after the break.

Arsenal were given a real let off on 67 minutes as Jack Simpson headed wide of an empty net after visiting keeper Emiliano Martinez failed to connect when attempting to punch a corner clear.

Gosling saw a shot deflected wide inside the final 10 minutes but Bournemouth were not to be denied as Surridge struck in the fifth minute of added time, having only been introduced as a substitute in the closing stages of normal time.

Simon Francis’ cross caught the Arsenal defence napping and 21-year-old Surridge was able to nip in, round Martinez and score.

There were still three minutes of additional time remaining but Bournemouth couldn’t find an equaliser as Arsenal secured their place in the fifth round, where a trip to League One club Portsmouth awaits.