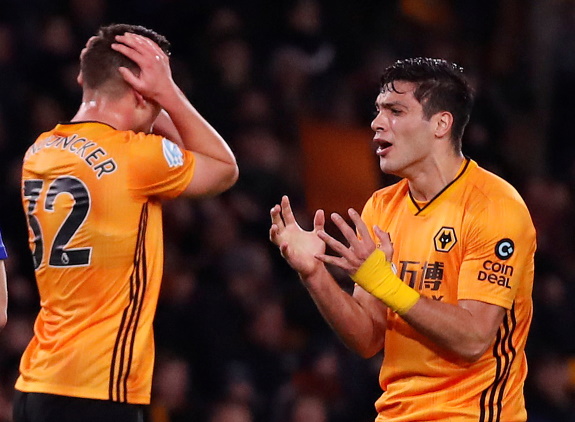 Wolves missed their chance to cut the gap between the top four as they were held to a goalless draw by 10-man Leicester City after more VAR drama.

The home side climbed up to seventh with a point, but they are still five points behind fourth-placed Chelsea after Willy Boly’s goal was chalked off for offside.

Leicester also lost Hamza Choudhury to a second yellow card, but Brendan Rodgers’ men did enough to secure a crucial point on the road.

The first save of the match was made by Rui Patricio as the Wolves goalkeeper had to react quickly in the ninth minute when Youri Tielemans’ effort took a deflection off Boly.

Patricio did well to react as he got down to his left-hand side, just as Kasper Schmeichel did two minutes later.

Pedro Neto’s determined run helped him carve open the Leicester midfield, and he picked out Diogo Jota at the far post, but Schmeichel stuck out his leg to deny him.

With three minutes remaining of the first half, striker Raul Jimenez wasted a glorious opportunity as he headed wide of the target after an inch-perfect cross from Jonny Castro.

Two minutes later Wolves were celebrating after opening the scoring from a corner, but VAR ruined their party.

Neto took the corner short before picking out Matt Doherty at the far post who nodded across goal for Boly. The centre-back then headed into the empty net, but VAR suggested Neto’s left foot was offside.

Both teams continued to cancel each other out in the second half, but the game was turned on its head when Choudhury was shown his second yellow card after bringing down Leander Dendoncker on the halfway line.

Wolves had already introduced Adama Traore, but it was Jimenez that wasted chance after chance.

The Mexico international missed a header from the penalty spot in the 91st minute before seeing another shot blocked by Caglar Soyuncu.

Friday’s point leaves Leicester in third, and they are now 14 points clear of Wolves after 26 games.