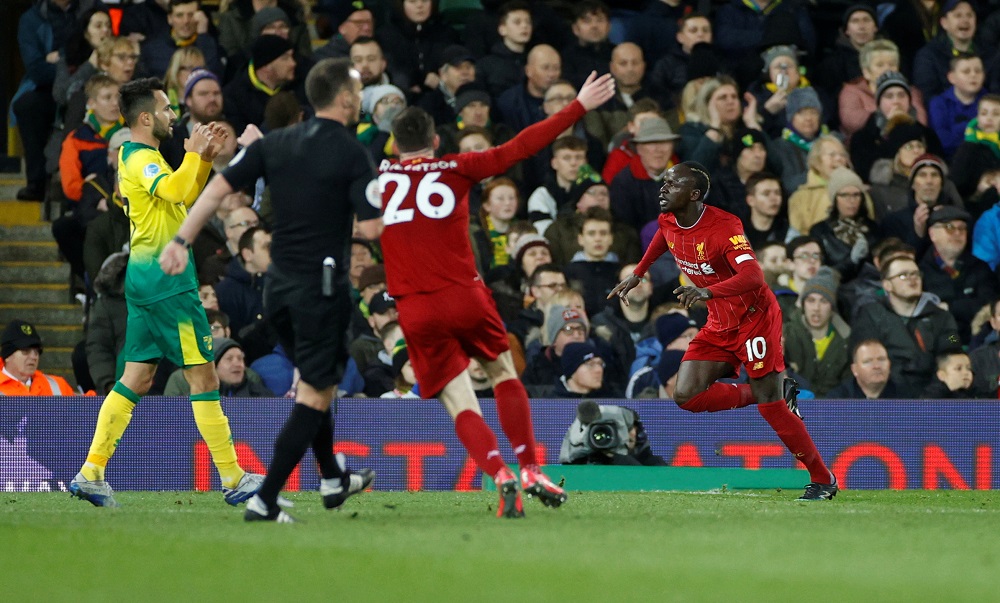 Liverpool have moved 25 points clear at the top of the Premier League table as they edged to a 1-0 win over Norwich City at a stormy Carrow Road.

The hosts named an unchanged side from the one which earned a goalless draw at Newcastle United last time out, with Ben Godfrey having to settle for a place on the bench.

The Reds showed one alteration from the 4-0 victory over Southampton, with Naby Keita preferred to Fabinho in midfield, while Sadio Mane and James Milner were named among the substitutes.

Trent Alexander-Arnold fired a shot well wide inside the first 60 seconds, with the visitors dictating much of the play in the opening minutes of the game.

Twenty-seven minutes in the Canaries were forced to replace Sam Byram due to a hamstring problem, with Jamal Lewis taking his place as the wet and windy conditions failed to help either side.

Nine minutes before the break the hosts almost broke the deadlock when Lukas Rupp ran clear and tried to play in Teemu Pukki, only for Reds keeper Alisson to make a crucial intervention.

Early in the second half, Todd Cantwell saw his shot hit the sidenetting although it was again the visitors who were dominating the possession.

And they almost hit the front just before the hour mark as home keeper Tim Krul tipped a Keita drive away for a corner before superbly denying Mo Salah and Keita again in quick succession to keep the scoreline blank.

Soon after both Mane and Fabinho entered the fray, with Salah seeing another effort blocked as the visitors pushed forward once again.

However, it was City who then went closest as Cantwell laid the ball off to Alex Tettey and his drive smacked against the near post, with Alisson struggling to try and cover.

Twelve minutes from time the breakthrough came and it was Mane who was the man to do the trick, taking down a Henderson pass before turning to strike a left-foot shot into the net past the stranded Krul.

City threw on Emiliano Buendia and Josip Drmic in a bid to try and rescue something from the game, with Firmino missing a late chance to make the game safe for the runaway league leaders.