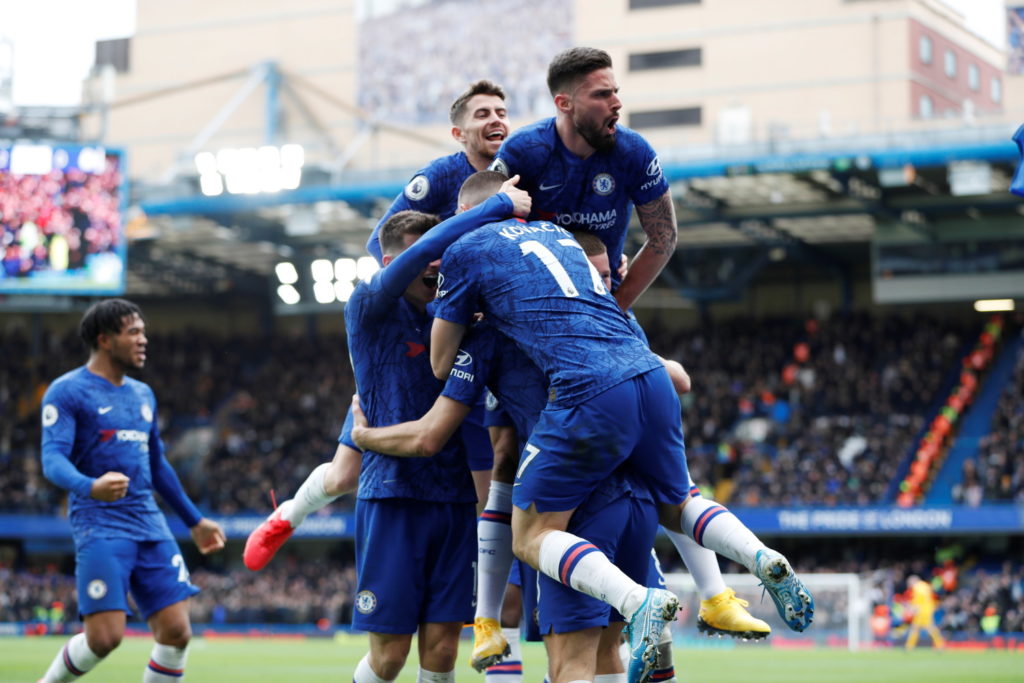 Chelsea moved four points clear in fourth spot in the Premier League after a 2-1 win against London rivals Tottenham at Stamford Bridge.

Frank Lampard made four changes to the Chelsea side that lost 2-0 to Manchester United at Stamford Bridge in the Premier League on Monday.

Tottenham boss Jose Mourinho also made four changes to the team that grabbed a late 3-2 win at Aston Villa in the Premier League last weekend.

Chelsea went into the game looking to end a run of four league games without a win and, despite making a bright start; they almost gifted a lead to Spurs in the 10th minute, with Lucas lashing a low strike from the edge of the area which Willy Caballero got down well to save.

The hosts responded and Hugo Lloris did well to deny Mount at his near post before Barkley flashed an effort just wide from 25 yards.

Chelsea were rewarded for their good opening when they took the lead on 15 minutes as Giroud beat Lloris from an angle after Barkley’s effort rebounded to him off the crossbar. There was a Video Assistant Referee (VAR) check for offside but the Frenchman’s first goal of the season was given.

The Blues continued to press and Alonso was next to go close on 23 minutes when he lashed an effort inches over the Spurs bar.

Spurs then had a couple of opportunities as Cesar Azpilicueta produced a last-ditch block to deny Lucas before Caballero tipped a Davinson Sanchez header over the top on 35 minutes.

Tottenham had won just once in their last 33 games at Chelsea going into the game and it looked like becoming one in 34 when Chelsea extended their lead on 48 minutes.

Giroud flicked the ball on to Mount who then squared to Barkley and he played in Alonso to drill in his second goal of the season from 20 yards.

Lo Celso somehow avoided a red card after a VAR check when he went over the top of the ball and caught Azpilicueta high on the shin just after the 50-minute mark.

Erik Lamela saw a free-kick deflect off the defensive wall and fly over the crossbar before Harry Winks had a penalty shout on 74 minutes when he went to ground following a challenge from Antonio Rudiger, but referee Michael Oliver waved play on.

Chelsea should have wrapped up the three points on 79 minutes when Mount teed up Tammy Abraham, but Lloris produced a superb save to claw the ball away from his goal.

Alonso almost grabbed his second of the game moments later, but watched as his free-kick beat Lloris before crashing back off the bar.

Spurs gave themselves hope of salvaging a result in the final minute when a Lamela shot deflected off Rudiger and wrong-footed Caballero to make it 2-1. However, Chelsea held on to move four points ahead of Spurs.