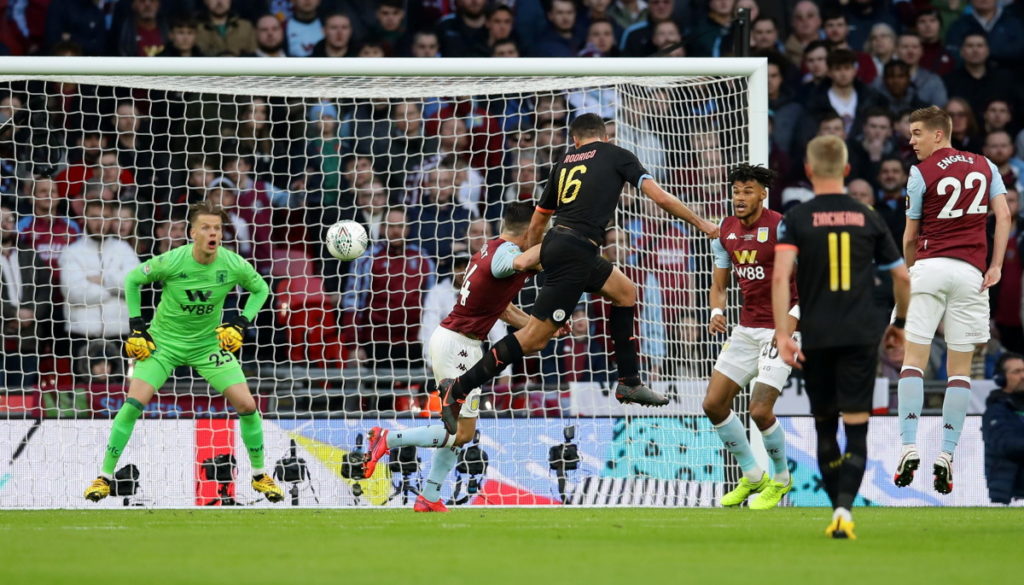 Manchester City claimed the EFL Cup for the third year in a row with a 2-1 victory over Aston Villa at Wembley Stadium.

Sergio Aguero gave City the lead after 20 minutes and Rodri doubled their advantage on the half-hour mark.

Villa halved the deficit before the break through Mbwana Samata but they were unable to find an equaliser, despite hitting the woodwork late on.

Villa made a bright start and Anwar El-Ghazi headed over with the first real opening of the game but the defending champions soon began to dictate proceedings.

Oleksandr Zinchenko saw an effort blocked and Aguero missed the target with a header before the Argentine broke the deadlock.

The City striker fired home after youngster Phil Foden headed the ball down to him and 10 minutes later Rodri gave Pep Guardiola’s men a two-goal cushion.

The midfielder scored with a headed effort from an Ilkay Gundogan corner and it appeared as if the holders were cruising to a routine win.

Villa managed to hit back though as January arrival Samata headed in from El-Ghazi’s cross four minutes before the break.

City continued to dominate as they pushed for a third goal and Foden fired wide from the edge of the area soon after the restart.

Rodri came close to putting the game to bed with just over 15 minutes to play as he connected with another corner, but Villa keeper Orjan Nyland was equal to his effort and made an impressive save.

Aguero then fired wide but Villa came close to forcing extra time in the dying stages but City stopper Claudio Bravo somehow managed to keep out Bjorn Engels’ header from a corner, tipping it on to the post before it was scrambled clear.