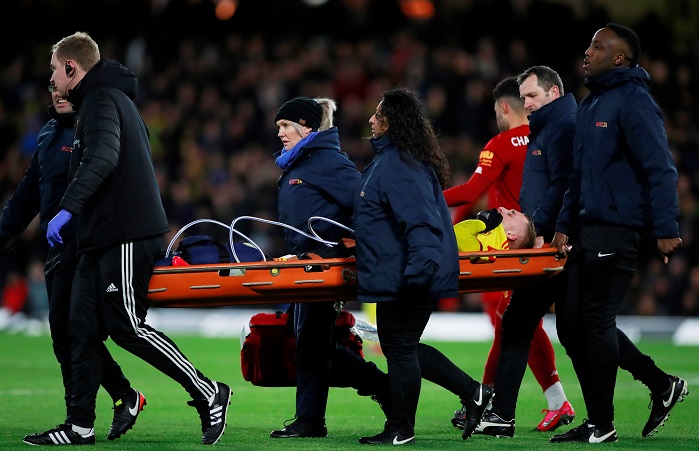 Watford winger Gerard Deulofeu is likely to miss the remainder of the season after suffering a serious knee injury.

On what was a near-perfect day for the Hornets as they stunned Liverpool 3-0 to end their 44-match unbeaten league run, Deulofeu’s injury was the only blemish.

He was carried off on a stretcher in the first half after a long delay following a clash with Reds defender Virgil van Dijk.

The Spaniard’s knee buckled awkwardly under the challenge and he required oxygen as he departed to rapturous applause from the home supporters.

Roberto Pereyra replaced him and the Hornets did not feel his absence too hard as they effectively cruised to a 3-0 victory against the runaway leaders.

Scans showed on Sunday that Deulofeu injured his anterior cruciate ligaments in the collision.

He is set to miss the rest of the season and could be unavailable for the start of next season, according to boss Nigel Pearson.

“It’s distressing for the players and obviously for Geri. I went into the medical room at half-time and he was clearly distressed and in quite a bit of pain. He’s been excellent for us so we’ll just have to see how that one is.”

The Hornets manager admits he will feel the loss of one of his star performers.

“Unfortunately for us the scan results really show he is probably going to be out for the rest of the season,” he said.

“The initial scan results show that he has got an ACL (injury), which is a really bad thing for us because he has been such an important player for us.”

Deulofeu has performed well for Watford this season despite his side struggling in the top flight.

The ex-Barcelona and Everton man has scored four goals in 29 appearances as they sit just above the relegation zone.

The margin of their win at Vicarage Road on Saturday means they have leapfrogged Bournemouth, who got a 2-2 draw against Chelsea on Saturday.

Watford’ next game without Deulofeu in their ranks is an away game at Crystal Palace on Saturday.

Following the Eagles’ clash, Watford play out-of-form Leicester at home before travelling to face Sean Dyche’s Burnley to round off March.