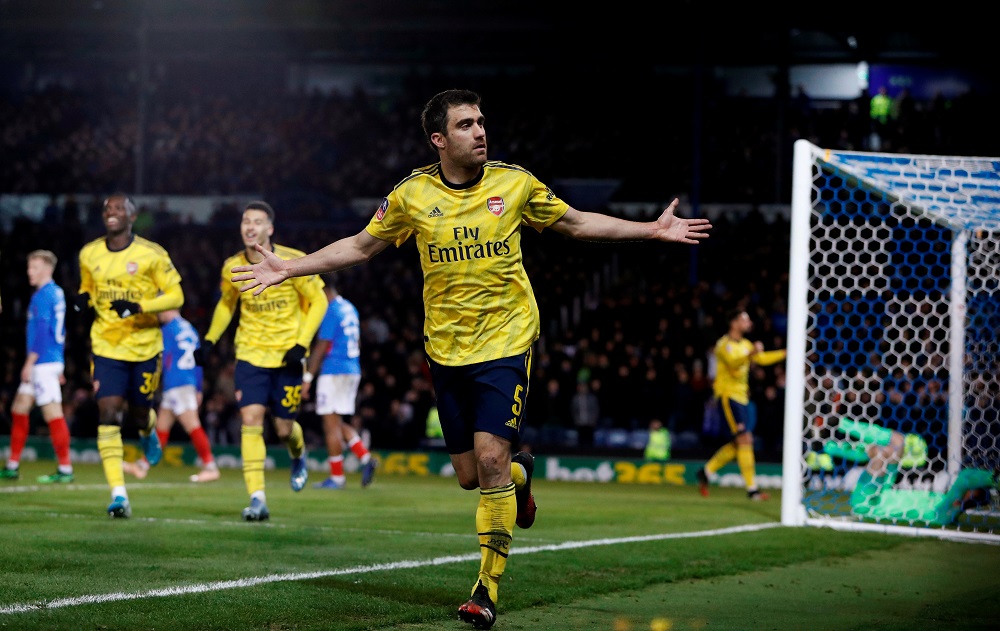 Arsenal eased into the last eight of the FA Cup as they defeated League One promotion hopefuls Portsmouth 2-0 at Fratton Park.

Kenny Jackett made six changes to the Pompey side who won 3-0 against Rochdale, with Ross McCrorie, Steve Seddon, Ben Close, Gareth Evans, Marcus Harness and Ellis Harrison all handed starts.

The Gunners left Pierre-Emerick Aubameyang and Mesut Ozil out of their matchday squad altogether, with Spanish defender Pablo Marti handed a club debut and Alexandre Lacazette among the substitutes.

The League One hosts made a bright start without testing Emiliano Martinez in the Arsenal goal, while the visitors suffered a blow with just over ten minutes played as midfielder Lucas Torreira was stretchered from the field of play.

The first shot on target came 22 minutes in, with home keeper Alex Bass getting right behind a tame, left-foot effort from Bukayo Saka.

Five minutes later Evans headed wide from a Seddon cross when he should have done better and Pompey were made to pay in stoppage time as Arsenal broke the deadlock.

Reiss Nelson whipped in a fine cross from the right flank and Sokratis Papastathopoulos arrived to steer a firm right-foot volley just inside the near post, leaving Bass rooted to the spot.

Six minutes into the second half the Premier League side doubled their lead, with Eddie Nketiah netting his third goal in his last five appearances.

The young striker bundled the ball in at the near post after more good work down the right by Nelson.

Twenty minutes into the second half the hosts threw on John Marquis and Ronan Curtis in a bid to turn the tide, with the latter finally registering a shot on target for the home side 15 minutes from time.

That proved to be a lone spark for Pompey, who were unable to threaten again as time ticked away and Arsenal secured a comfortable victory.