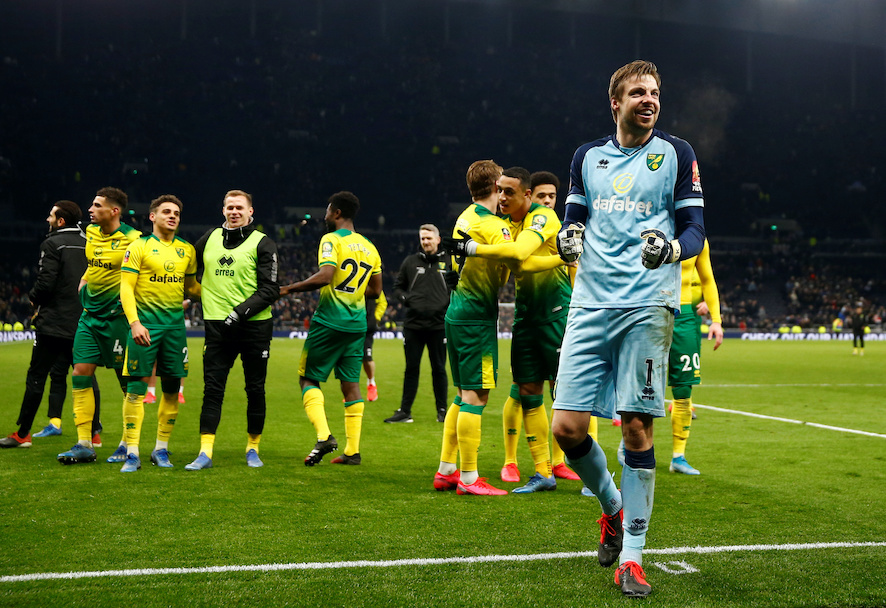 Norwich are through to the quarter-finals of the FA Cup for the first time since 1992 after Tim Krul guided them to a penalty shootout win over Tottenham.

The two sides were forced into extra-time at the Tottenham Hotspur Stadium, with Spurs well below their best on Wednesday night.

It all started so well for the home side, with centre-back Jan Vertonghen opening the scoring inside 13 minutes. The Belgian headed home Giovani Lo Celso’s cross at the back post from a free-kick, with Krul left helpless in goal.

Jose Mourinho’s men should have kicked on from there, but they allowed Norwich to come back into the game and striker Josip Drmic eventually levelled matters with 12 minutes remaining.

Kenny McLean’s shot was spilt by Michel Vorm, and Drmic pounced to send the game into extra-time.

Right-back Serge Aurier thought he had done enough to win it, but with five minutes remaining, his goal-bound shot was cleared off the line by Ben Godfrey.

Penalties ensued, and Eric Dier got Spurs rolling with a simple finish before McLean was denied by Vorm. Erik Lamela then hit the crossbar with his effort before Adam Idah slotted home.

Lo Celso made it 2-1 on penalties despite slipping, before Marco Stiepermann and Todd Cantwell found the back of the net.

Troy Parrott had missed before Cantwell’s strike before Gedson Fernandes’ dismal effort was tipped away by Krul.

The Dutchman celebrated by running towards the 9,000 travelling fans in the away end, and Norwich City will now face the winner of Thursday’s clash between Derby County and Manchester United.