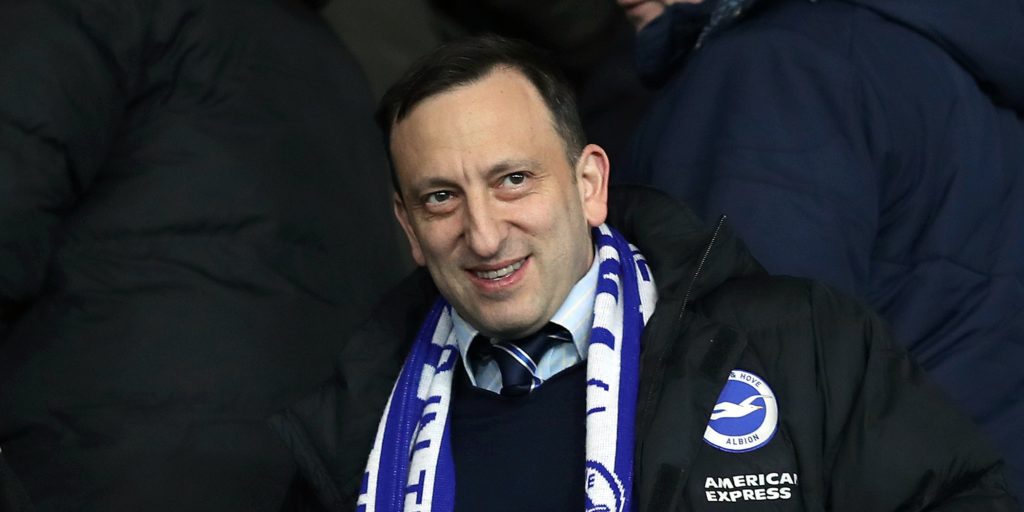 The Seagulls would survive if the Premier League campaign was ended early as they sit two points clear of the drop zone.

Brighton owner Tony Bloom has claimed it would be unfathomable to relegate clubs from the Premier League if the season cannot be completed due to the coronavirus outbreak.

Arguments have raged this week after a Scottish Professional Football League vote led to the lower league season being ended, with Partick Thistle and Stranraer demoted as a result.

With no return date set for the Premier League and a growing focus on June 30 as a potential cut-off date, a repeat is possible in England, but Bloom believes it would be unfair to relegate any club under the circumstances.

“I don’t foresee a situation, if the season’s not played out, that teams will get relegated on a points-per-game basis,” he said.

“I just don’t think it’s fathomable that a team which is not allowed to play out the season may lose out on 0.2 points based on this system, and also it does not take into account the strength of the team you have not played.”

The Seagulls would survive if the season was ended early as Graham Potter’s side sit two points clear of the drop zone – occupied by Bournemouth, Aston Villa and Norwich – with nine games left to play.

“You may get a title winner, obviously Liverpool deserve it, you may use that criteria for European qualification but I do not see how anyone can vote for that, certainly the per cent needed (70 per cent), for teams to get relegated. I really cannot foresee that.”

There is now a move in Scotland for a realignment of the divisions which may save those facing relegation, but Bloom said there has been no discussion yet of expanding the Premier League under a similar scenario.

“If we get to a situation whereby it’s decided the season can’t be concluded, then we need to have serious conversations about what’s going to happen next season.”

Bloom also expects the Financial Fair Play rules to be relaxed due to the crisis. Burnley have said they could lose as much as GBP 50million if the season cannot be finished, while Brighton had already budgeted to make a loss due to investment in the squad.

“We are going to be well under the FFP numbers,” Bloom said. “It may affect other clubs.

“It has not been discussed but I am sure if the virus meant people were going under the numbers it would be taken into consideration because it would be unfair to get a penalty because of the virus.”

The losses being sustained by clubs are expected to lead to a collapse in transfer fees during the next window.

“There’s no doubt the actual value of players right now has gone down in all squads,” Bloom said.

“That may rebound in a year’s time to something like what it is today, but there’s no doubt if you were going to sell a player in this transfer window coming up and you were expecting to be getting GBP 15m, that you’re going to get less than that.

“How much less, I have no idea. It depends on who the next few months play out.

“The number one thought in all of our minds needs to be the virus and the effects on the health of the nation. When you are talking about a new mortuary next to the Amex Stadium it really brings it home.”