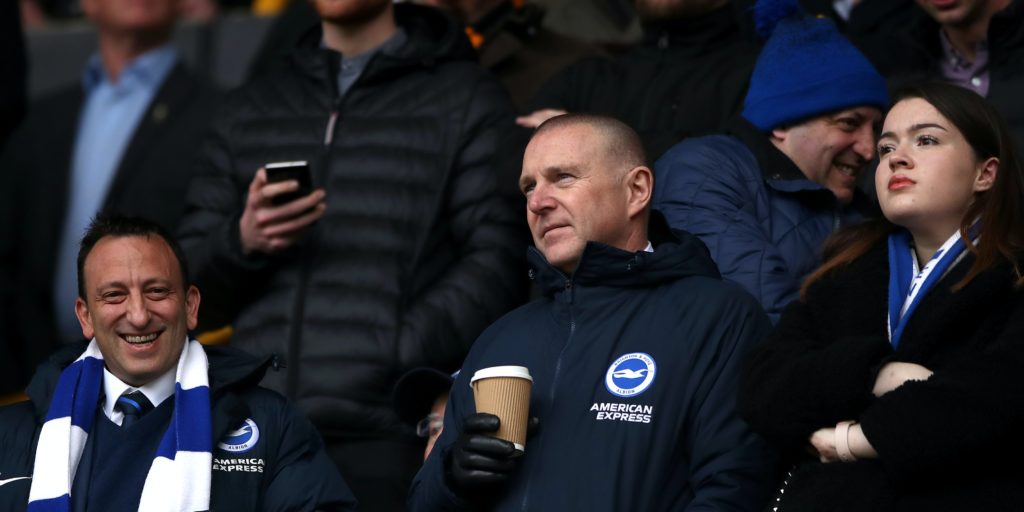 Barber’s club may need to plan for a lack of matchday revenue when the Premier League returns.

Brighton chief executive Paul Barber says clubs are going to have to adapt to the concept of playing behind closed doors for a long period of time, but is concerned about the repercussions.

With Chief Medical Officer Chris Witty suggesting on Wednesday that some social distancing measures could remain in place for the rest of 2020 as the country tries to get to grips with coronavirus, the prospect of playing football matches in front of a crowd diminished further.

It is widely accepted that if the current Premier League season is to be completed it will be behind closed doors, though there are increasing hurdles to overcome for that to happen, with regards to player testing and TV rights.

Hopes of starting next season in front of a crowd are fading, which could have severe consequences for clubs up and down the country.

“So, I must admit it concerns me hugely for football as a whole, for the industry as a whole. I think that it will put many clubs in a very, very difficult financial position.

“But it’s something, by the sounds of it, we are going to have to find a way of adapting to, not just commercially but also from a sporting point of view as well.

For football to resume even behind closed doors it is going to take the players to be regularly tested and train and play in a controlled environment.

With some NHS frontline staff and key workers still unable to get tested that seems a long way off and Seagulls boss Graham Potter says footballers should be down the list.

“People are looking at what’s happening in other countries and thinking that it can just be transferred across to here,” he said.

“We’re in a situation far behind other countries when it comes to testing. So, I think footballers and the footballers that I know wouldn’t be comfortable if they’re getting tested and key workers, frontline people in the NHS, aren’t getting the adequate testing.

“But not until it’s the right thing to do for the country and the overall health of the country.”

If play can get going behind closed doors, it will present the opportunity for live sport to return to television and there have been calls for some matches to appear on free-to-air channels so more people can watch them.

But Barber reckons Sky Sports and BT, who pay millions a year for rights, might have something to say about that.

He added: “We have got to be mindful that the largest part of our income comes from our broadcast partners. I would expected Premier League will make sure the main broadcast partners in the UK and overseas are properly protected should the rights to games be extended beyond the normal time.

“But certainly if we are playing behind closed doors then we would want as many of our fans to see the games, that is for sure.

“And that if it came at the right time it would give a little lift to people, if they got the opportunity to watch live sport again after such a long time that might be a positive.

“But as we have said before that can only happen when it is safe for everyone and when the Government give us that opportunity to do so.”

Meanwhile, Barber has confirmed that talks between the club and the players, led by Lewis Dunk and Glenn Murray, are still ongoing regarding a salary cut.