On this day: Arsenal celebrate title win – at Tottenham 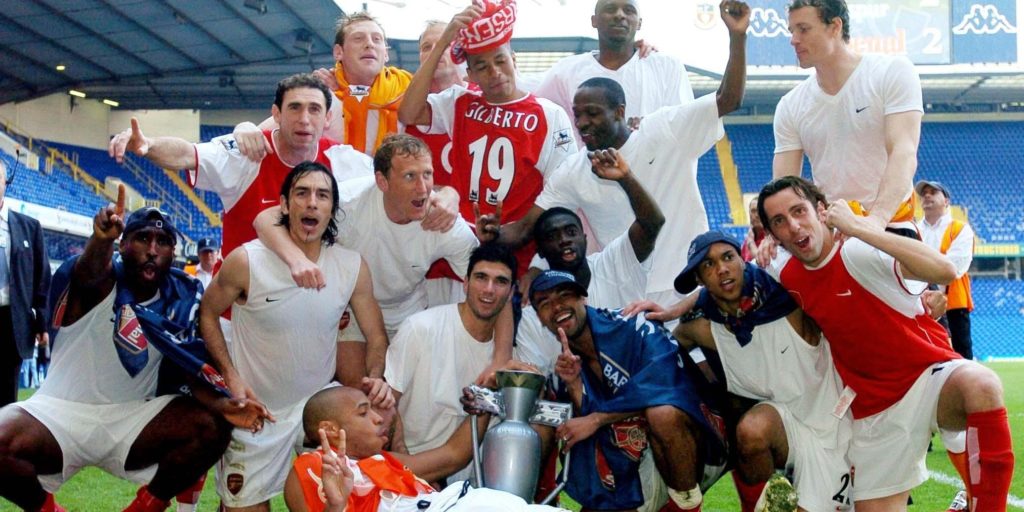 Celebrations for Wenger and in his team at White Hart Lane.

Thierry Henry twirled his shirt, Kolo Toure impressed with his acrobatics and Arsenal’s players danced together – an unlikely sight on the Tottenham High Road made possible by sealing the title at the sweetest of venues.

On this day in 2004, Arsenal made the short trip to bitter rivals Tottenham knowing they could seal the Barclaycard Premiership crown in dream fashion.

The team that would soon go on to become ‘the Invincibles’ became champions with fourth matches to spare as Arsene Wenger’s side secured a 2-2 draw at White Hart Lane.

Chelsea’s loss to Newcastle meant the Gunners knew they only needed a point at Spurs to seal the title, with captain Patrick Vieira and midfield maestro Robert Pires putting them ahead at the break.

Jamie Redknapp impressively reduced the deficit and a rattled Jens Lehmann conceded a late penalty that Robbie Keane successfully converted after being pushed by the goalkeeper.

But the outcome rather than the scoreline is what people remember.

Just as in 1971, the title was sealed at White Hart Lane as those clad in red celebrated wildly with no official ceremony to make the achievement.

“We’ve won the championship without losing a game and that hasn’t happened until now,” Wenger, serenaded by the fans, said. “For me that’s a tremendous achievement and I’m not sure we will see it again.

“I would like to congratulate my players and staff for their attitude and the consistency they have shown.

“It must have been good for the fans to see us repeat what happened in 1971 when we also won the title at Tottenham.”

It was a memorable moment that star turn Henry joined in dedicating to the fans.

“Although it was quite important for us to win the title here, it was more for the fans,” he said. “Even though we didn’t win the game, I still think people will remember that we won the title at White Hart Lane.

“That was really important for the supporters. Not so much for us, as we could have done it against Birmingham City next weekend or whatever, but to do it here for the fans was special.

“I said before the game that even if we had won the title at, for instance, Charlton, we would have celebrated on the pitch.

“You don’t win the title every day. It happened that it was at Tottenham and that’s more special but we would have done it everywhere.

“We know that it’s special for the fans so you can’t just leave and go home. They deserved it.”