Grounds for concern: Brighton chief opposes the idea of games at neutral venues 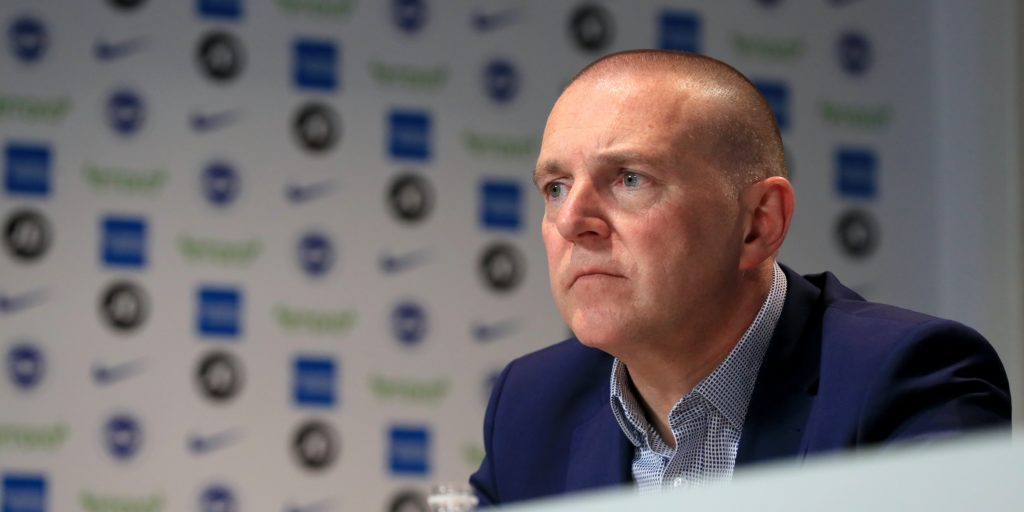 Brighton chief executive Paul Barber has voiced opposition to the idea of finishing the Premier League season at neutral venues.

The PA news agency understands clubs were told on Friday that limiting action to a handful of selected stadiums was the only way it would be possible to complete the remaining matches of the 2019-20 season for safety reasons.

The latest updates to ‘Project Restart’ were understood to have been well received at a meeting on Friday, but there remained opposition on competition and integrity grounds about using neutral venues, and Barber confirmed Brighton are among those with reservations.

“Clearly, we must all be prepared to accept some compromises, and we fully appreciate why playing behind closed doors is very likely to be a necessary compromise to play our remaining games while continuing to fully support the government’s efforts to contain the spread of coronavirus,” he said on the club’s website.

“But at this critical point in the season playing matches in neutral venues has, in our view, potential to have a material effect on the integrity of the competition.”

Brighton were due to be at home for five of their remaining nine matches as they fight for Premier League survival, and Barber fears the loss of home advantage could prove critical – even without fans.

“The disadvantages of us not playing the league’s top teams in our home stadium and in familiar surroundings, even with 27,000 Albion fans very unlikely to be present at the Amex, are very obvious,” Barber said.

“Clearly, we must accept there may also be some benefit from playing our remaining four away matches at neutral venues but the fixture list simply isn’t equally balanced at this stage of the season, and we didn’t play our first 29 matches of the season in this way. So, in our opinion one thing doesn’t cancel out the other.”

The PA news agency understands the Premier League will look at using between eight and 10 stadiums, with venues likely to be chosen for ease of ensuring social distancing – which would appear to favour more out-of-town sites.

Some reports had named the Amex as among the stadiums under consideration, but Barber said that was speculation at this stage.

“We haven’t been asked if we would consider our stadium being used as a neutral venue for any remaining Premier League matches – by our colleagues at the league, the government or the police – and at this point we haven’t been approached to have such a discussion either so I am unable to say why our stadium has been included in the reports,” he said.

West Ham vice-chairman Karren Brady said that every Premier League club wants to complete the season but has warned there are “a lot of obstacles” to overcome.

“At yesterday’s meeting, every club said it wants the season to restart,” she wrote in her column for the Sun.

“We all know that it is going to take a lot of working together, good faith, careful thought and compromises if we have any chance of that happening.

“There are a lot of obstacles to overcome and no doubt many compromises to make.”

Brady has detailed a four-phase strategy for a return to action, with the first one – isolated training sessions at training grounds – already under way.

Phase two would be a return to group training, phase three is the restart of domestic games, and the final phase would see a return to international matches.