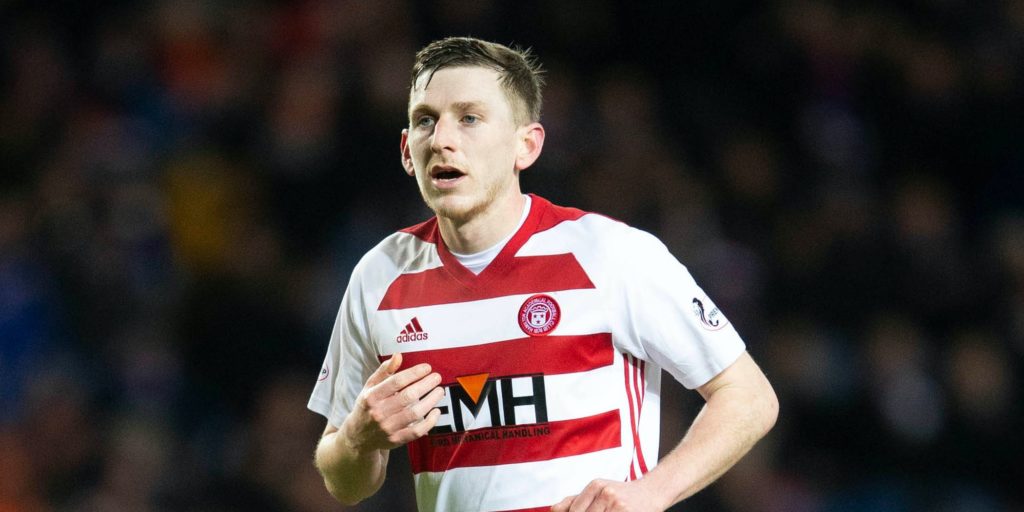 The Hamilton midfielder has concerns for the future.

Hamilton midfielder Blair Alston has played 333 career games but his deal at New Douglas Park expires at the end of the month.

At 28 he is in his prime and, here, he writes for the PA news agency about his fears as an out-of-contract player during the coronavirus crisis.

As an out-of-contract player it’s impossible not to have that feeling in the pit of your stomach.

The first thought about footballers is ‘oh, you’re rich’ because that’s what fans see in the Premier League with the wages and transfer fees.

With pretty much every other player, it’s just not the case. No-one is sitting on a goldmine waiting for this to blow over.

It’s almost a different game and for most players out-of-contract in Scotland it is a concern where the next pay cheque comes from after this month.

I got married last year and we’re fortunate Nicole works for the Royal Bank of Scotland and they will be paid until September but soon we’ll lose a big chunk of our income.

I’m furloughed, although the clubs is topping us up, and then out of work at the end of May. A while back Hamilton told me the plan was to extend my contract for next season but coronavirus changed all of that.

Players in Scotland don’t get the extra month’s pay, if you haven’t joined a club by June, like they do in England. Once the contract is over, that’s it, you’re on your own.

You never know how it’s going to develop but at the moment it’s one more pay cheque and then having to go and find something else to do for the next few months.

At 22 I knew football was brilliant but I wasn’t going to make enough money and retire to live a happy life.

I’m studying for my business degree, part time at the Open University, for life after football but you never expect it could happen now.

My studies have been curtailed so I don’t even know when the next stage of that will be picked up.

I’ve never done anything apart from football. If you have to go and get a job – where there are thousands of others going for the same one who are probably more qualified than you – how do you get one?

Apart from a labouring job, what do you get?

I’ve got enough savings so it’s not a case of we’d have to sell the house next month but if it carries on for six months you do have to start wondering.

It isn’t ‘please feel sorry for me, I’m this really unlucky person’ because the whole world is suffering right now.

The media and newspapers and football are no different to any other industry and they are all going through an incredibly difficult time. It’s scary for everyone.

They’ll be some clubs who have investors backing them but the majority will cut back and go with smaller squads.

Everyone is going to be fighting for the same spots and there will be players who will have to take big wage cuts.

A full-time contract could end up being part-time, a lot of players are going to suffer.

I’ve worked my whole life to make it at the best level, I feel I’m at my peak and this throws you right off your tracks.

I felt I did well this year, we were looking like we were going to stay in the league and I’d have clubs interested.

My agent has spoken to two or three clubs in Scotland who are very interested but none of them know what budget they will have to sign new players. I would happily go to England or overseas but all countries are experiencing the same problem.

Players will be scared because, while clubs don’t know what will happen, they can’t prepare either.

The PFA here are really good, they are emailing all the time, and it’s not as if the SPFL have a great amount of control. If they had all the answers it would be easy but they might be planning for something which isn’t feasible.

Players understand it’s not an easy decision and there’s no right or wrong answer.

There are going to be a lot more discussions and there is a lot of talk over whether the leagues will reconstruct. You just have to keep yourself as ready as possible.