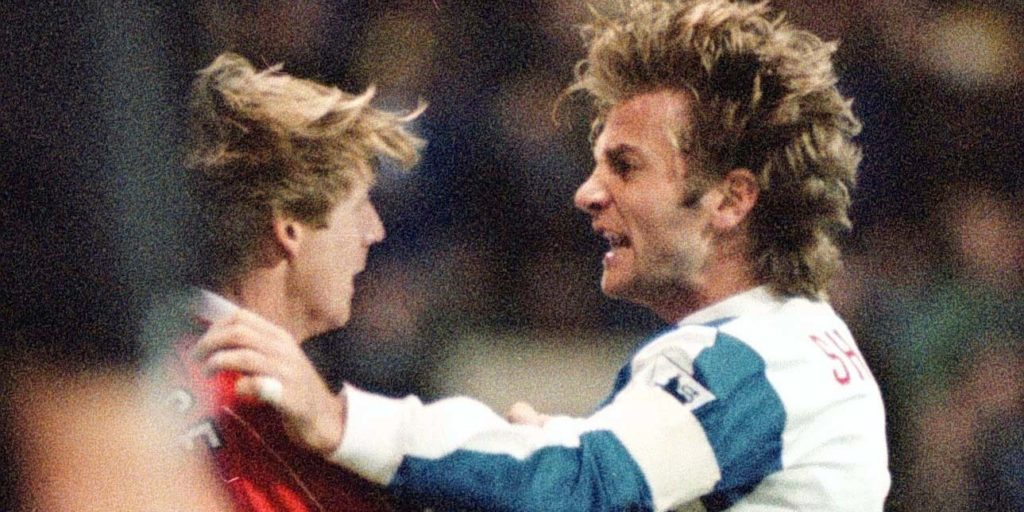 Sherwood skippered Blackburn to the title in 1994-95.

With his floppy hair and checked blue and white shirt, Sherwood lifting the 1994/1995 trophy for Blackburn at Anfield is one of the most iconic images of the Premier League era.

Sherwood was the midfield general of Kenny Dalglish’s Rovers side that took the league by storm. While the goals of Alan Shearer and exciting wing play of Jason Wilcox and Stuart Ripley caught the eye, it was Sherwood who provided steel.

Signed in 1992 from Norwich, he immediately established himself at Ewood Park and by the time the 1994/95 campaign came was one of the most influential players in the division, playing all 38 games, producing form that earned him a place in the PFA team of the year.

The central midfielder was a fiery character, with regular tussles with opposition players and, on one memorable occasion, his own team-mate when he clashed with David Batty.

He never scaled those heights again at Blackburn and moved to Tottenham in 1999, where he could have lifted more silverware had he not been cup-tied for Spurs’ 1999 League Cup triumph over Leicester.

Four years at White Hart Lane did bring an England call-up but no more chance of silverware before he dropped down a division to join Portsmouth’s revolution.

He went into coaching back at Tottenham when his playing career ended and became manager when Andre Villa-Boas was sacked in 2013, but was replaced the following summer by Mauricio Pochettino.

He took Aston Villa to the FA Cup final in 2015 but his side suffered a heavy defeat and he has worked as a television pundit since.