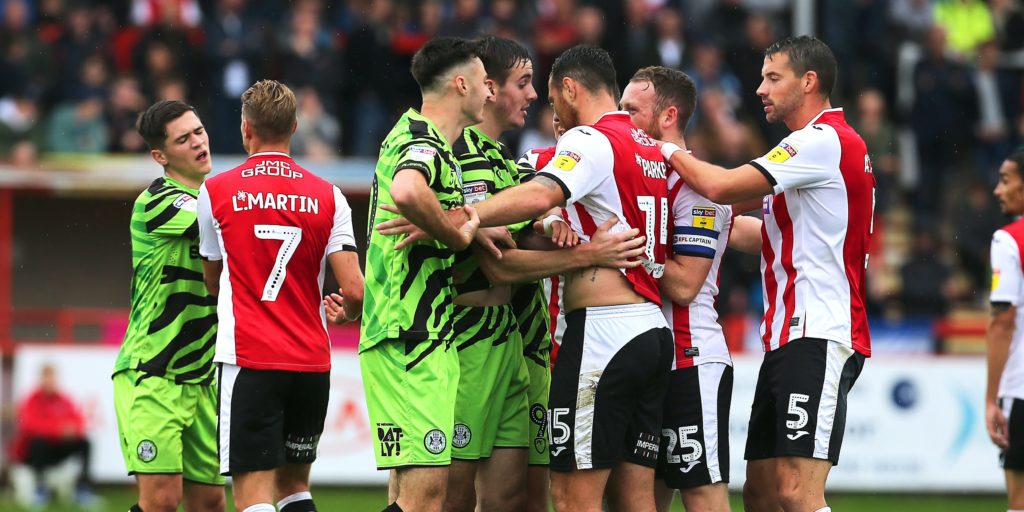 League Two in favour of four teams being promoted but none being relegated.

League Two clubs are moving towards ending the 2019-20 season on a points-per-game basis, but at least one chairman in the division insists it is not a unanimous decision.

The English Football League said fourth-tier sides had “unanimously indicated a preferred direction of travel to curtail the campaign” at their meeting on Friday because of the costs connected to resuming amid the coronavirus pandemic, while League One clubs failed to reach an agreement.

League Two sides agreed the final table should be determined on an unweighted points-per-game basis, the top three should be automatically promoted and the next four should play off for one remaining promotion place.

Crucially, though, the clubs asked the EFL for there to be no relegation, which would mean only National League leaders Barrow coming up because of Bury’s demise last summer.

Forest Green chairman Dale Vince said his club had not wanted to end the season, felt the decision had been rushed and that to block relegation was “all kinds of wrong”.

He told the PA news agency: “It might be that the dominant conversation was from clubs that wanted to (curtail the season), and that somehow swayed their judgement as to what was being said.

“But our chief executive was on the call and we want to play, and he would have said that.”

Vince said it was “hypocrisy” to retain promotion but prevent a National League team coming up.

“At the moment there will be teams who will think they could have made an automatic promotion spot, could have made a play-off spot. It just seems like pass the parcel – the music has stopped and you’ve got what you’ve got,” he said.

“If you’re going to apply a rule that says we’re going to freeze the league where it is, you’ve got to do it top and bottom. It’s all kinds of wrong on the National League.”

The EFL board must now consider the implications of the League Two clubs’ position when it meets on Wednesday.

Vince said the costs of continuing – including Covid-19 testing – will have been a key factor for many clubs.

“Money was a driving factor and may have been what pushed (the clubs) over the edge,” he said.

“The EFL seemed to indicate they would pay for it, that was the understanding we had, and then as of yesterday when they put a price on it there was a different indication.

“I think it was about GBP 120,000 per club. That was just a quote the EFL got to do the whole competition. We would have paid it.

“I don’t think the judgement has been made with the complete picture. I think (the decision) has been rushed.

“The Bundesliga has just gone back this week, the new antibody test announced this week is a game-changer. We don’t have to make a decision for a week or two I reckon.”

No agreement was reached in the third tier, who are set to reconvene on Monday.

Rotherham chairman Tony Stewart was frustrated that his division had not been as decisive as the league below.

“It is ridiculous,” he told the PA news agency.

“I believe there are two options now, one is to fulfil the fixtures totally and the other is the top two will go up, and the (bottom) three will go down, and the next four from the top will be in the play-offs.”

Six clubs who are outside the top two but with a chance of getting promotion if play resumes have been particularly vocal.

“The magic six, and I am sure you know who they are, they are thinking that they could have got higher heights,” Stewart added.

“There was a split but I do believe (if) it went to a vote it would be a cancellation.

“I am frustrated by the indecision – it is not just the EFL, we have got the Premier League, all the moneybags, the PFA has not been helpful whatsoever.

“It just seems like they need to bang their heads together. We need a decision, whether we fulfil the fixtures, the other option is the best option, but at the end of the day we need some decisions.”

Fleetwood, Ipswich, Oxford, Peterborough, Portsmouth, and Sunderland said on Thursday they were opposed to ending the season on a points-per-game basis and wanted to play on.

Cheltenham secretary Paul Godfrey fears the problems for League Two clubs are just beginning despite the division nearing a resolution.

It is anticipated next season will start behind-closed-doors and Godfrey is concerned how clubs will cope without gate receipts.

“We don’t know when we are going to be coming back for next season. That’s the bigger issue than finishing the current one,” Godfrey told the PA news agency.

“When will it be safe to have fans back in the stadium again? Only then can you start earning a large part of the revenue.

“We would be OK until the autumn but you cannot go on forever. If you are looking at no crowds until January that would give us a major problem.

“It is clear from the meetings we’ve had in League Two that there are some clubs who are going to reach that point sooner than we are.”