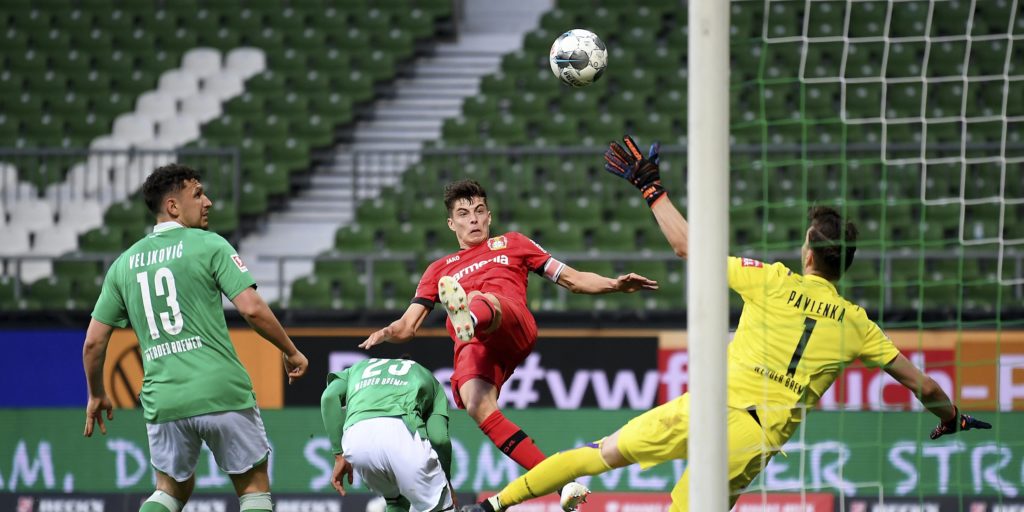 The forward has been linked with a move to Chelsea and picked up where he left off before the Bundesliga shutdown.

Kai Havertz continued to put himself in the shop window as his two goals for Bayer Leverkusen helped earn a 4-1 win over Werder Bremen.

Havertz has been linked with a move to Chelsea and picked up where he left off before the Bundesliga shutdown by converting two headers in the space of five minutes.

The 20-year-old had scored five goals in eight games before the suspension and showed himself to be one of the hottest young forwards in Europe with a first-half brace, while Mitchell Weiser and Kerem Demirbay added further goals after the break.

Theodor Gebre Selassie briefly brought Bremen on level terms, but the hiatus does not seem to have helped them and they remain second from bottom, five points off safety and heading for a first relegation in 40 years.

Havertz had barely been involved by the time the game burst to life in the 27th minute.

Moussa Diaby surged down the right and sent in an inviting cross which Havertz climbed highest to head home.

The lead was short-lived, however, as Gebre Selassie flicked home at the near post from a corner to level in the 29th minute.

It was a shame there were no supporters to witness what was a first home goal since November, with the Proclaimers’ ‘I’m Gonna Be (500 Miles)’ blaring out to an empty stadium.

The sound of the Scottish siblings had barely stopped by the time Leverkusen had regained their lead.

Demirbay floated in an inviting free-kick, with Havertz left unmarked to power home another header for his 12th goal of the season.

Bremen needed another quick response and could not have been presented with a better chance six minutes before the break as Leonardo Bittencourt burst through on goal, but he lacked composure when it mattered most and blazed over.

The game was made safe by the visitors 15 minutes after the restart as Diaby was again dynamic, this time on the left, and centred for Weiser, who was given the freedom of the home box to convert with a header.

It became a rout in the 78th minute with the goal of the game.

Substitute Karim Bellarabi was unchallenged as he headed towards the box, before sending through a delightful no-look through-ball to Demirbay, who did not disappoint with a sumptuous dinked finish.

That was the end of the visitors’ fun for the evening as Leverkusen consolidated fifth position, while Bremen were left with just one win in 12 games.