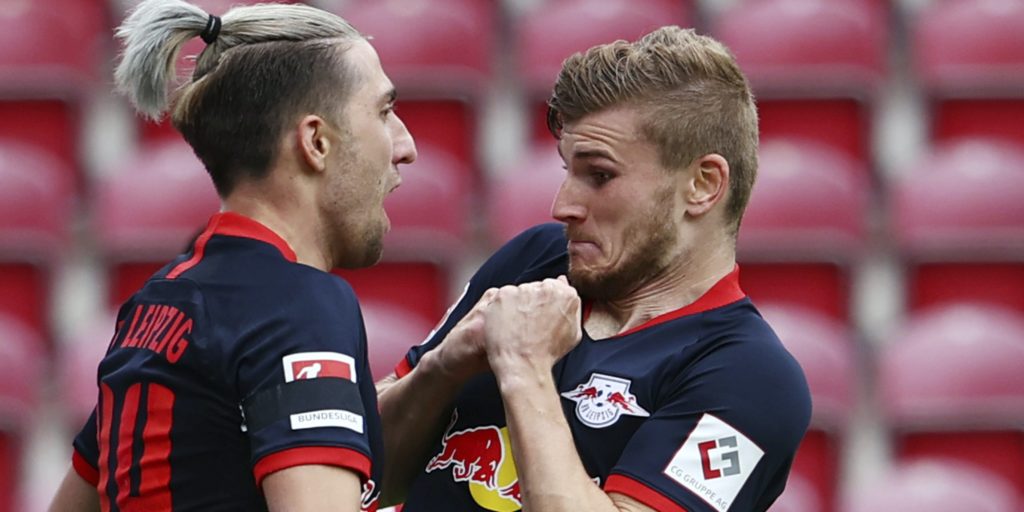 The Germany striker helped himself to a hat-trick as Leipzig moved up to third in the Bundesliga.

Timo Werner scored a hat-trick as rampant RB Leipzig reignited their Champions League push with a 5-0 rout of Mainz on Sunday.

The win was Leipzig’s first in four Bundesliga outings and moved them back up to third place in the table.

Mainz will be grateful the scoreline was not a repeat of their 8-0 defeat in the reverse fixture as Leipzig passed up several opportunities to score even more.

Werner put Leipzig ahead in the 22nd minute, turning in Konrad Laimer’s cross, before captain Yussuf Poulsen marked his 250th club appearance with the second goal.

A swift counter-attack had Leipzig forwards queuing up to apply the finish in the 36th minute, with Marcel Sabitzer the man to do it as he found the top corner.

And Werner added two more after the break, with the only surprise that there were not more, with Kevin Kampl seeing a goal ruled out for offside.

Mainz remain three points clear of the relegation play-off place, that cushion coming courtesy of a remarkable Cologne fightback in a 2-2 draw with Fortuna Dusseldorf which prevented the visitors from cutting the gap to a single point.

Dusseldorf looked to be cruising at 2-0 until Anthony Modeste struck in the 88th minute and Jhon Cordoba levelled in the first minute of stoppage time – Cologne’s seventh goal in time added on this season.

Kenan Karaman had put Dusseldorf ahead four minutes before the break with a shot that deflected off on-loan QPR defender Toni Leistner.

There was a let-off for Dusseldorf just before the hour as Mark Uth struck a post twice and was then fouled as he tried for a second rebound, only to see the following penalty saved.

And Dusseldorf took full advantage as Erik Thommy put away their second two minutes later, only to be pegged back at the end.

The pressure continued to build on Schalke manager David Wagner as they suffered a 3-0 home defeat to Augsburg.

Eduard Lowen opened the scoring in the sixth minute before Noah Sarenren Bazee doubled the lead with 14 minutes remaining and Sergio Cordova added a third in stoppage time.

The result leaves Schalke without a win in nine as their drift away from the European battle continued.