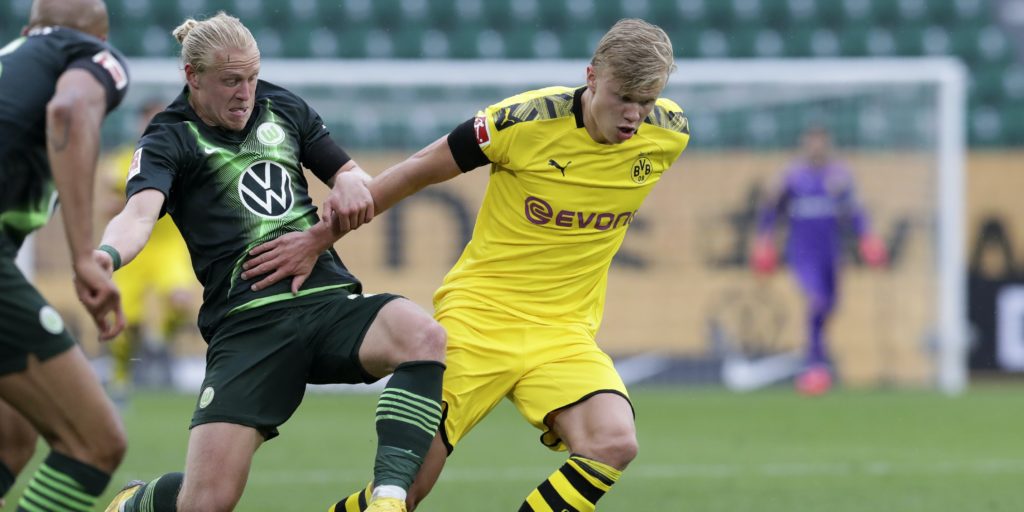 The Borussia Dortmund striker has 13 goals in 13 games since arriving in the January transfer window.

Bayern Munich head coach Hansi Flick says it is too early to say whether Borussia Dortmund sensation Erling Haaland will be better than Robert Lewandoswki.

Leaders Bayern come up against Haaland for the first time in Tuesday’s top-of-the-table clash which could have a big bearing on the outcome of the Bundesliga title race.

The Norwegian teenager has scored 13 goals in 13 games since joining in the January transfer window and is looking the part.

Lewandowski has been the division’s premier striker for some time, and has 27 league goals in 25 games this season, and Flick says the two are incomparable at this stage.

“It is his first season, so comparing him is too early,” Flick said of Haaland. “Robert has always been at world-class level in recent years. But Haaland is a huge talent.

“He is a young player, but he has a huge pull to the goal. He just wants to finish. He has an enormous dynamic.

“He is greedy, has an enormous size and is still agile. But we don’t just have to take care of him.”

Which striker performs better could go a long way to deciding the match at the Signal Iduna Park, where a Bayern win would leave them seven points in front of Dortmund and closing in on an eighth successive league title.

Flick, who will be without Thiago due to injury, says nothing will be decided.

“There are still a few games to play after this game,” he added at his pre-match press conference. “It is important to push your limits in every game. It is great to have two such good teams face each other.”

Borussia Dortmund coach Lucien Favre says Mats Hummels should be fit after an Achilles problem, along with Axel Witsel.

“We’ll have to wait and see with Mats, but I’m 99 per cent sure that he will be OK, ” Favre said. “Axel Witsel started training with the team again yesterday. He could be in the squad.”

Jadon Sancho will be pushing to start after excelling when he came on in the second half against Wolfsburg.

Bayer Leverkusen have hit the ground running with 4-1 and 3-1 wins since the restart and are within striking distance of second place.

Kai Havertz has added to his growing price tag with two successive braces and all eyes will be on the youngster when Wolfsburg visit.

Jonathan Tah (back) and Kevin Volland (ankle ligament) have returned to training and boss Peter Bosz will decide whether to include them, with such a packed schedule.

“The gap between matches is very short. With this run of games it’s very important for us to control workloads so that all the players stay fit,” Bosz said on the club’s official website.

Eintracht Frankfurt will be hoping to halt their slide when SC Freiburg visit.

Saturday’s 5-2 thumping at Bayern Munich made it six league defeats in a row either side of the suspension and they are in relegation trouble.

They had a seven-match slump just before Christmas, but bounced back and Sebastian Rode is backing them to do the same again.

“We fell into a downward spiral back then, but in the New Year we managed to get ourselves out of that hole by our own efforts,” said Rode. “And we’re capable of doing the same again – we’ve got the quality.”

Werder Bremen will look to build on their first win since January against Borussia Monchengladbach.