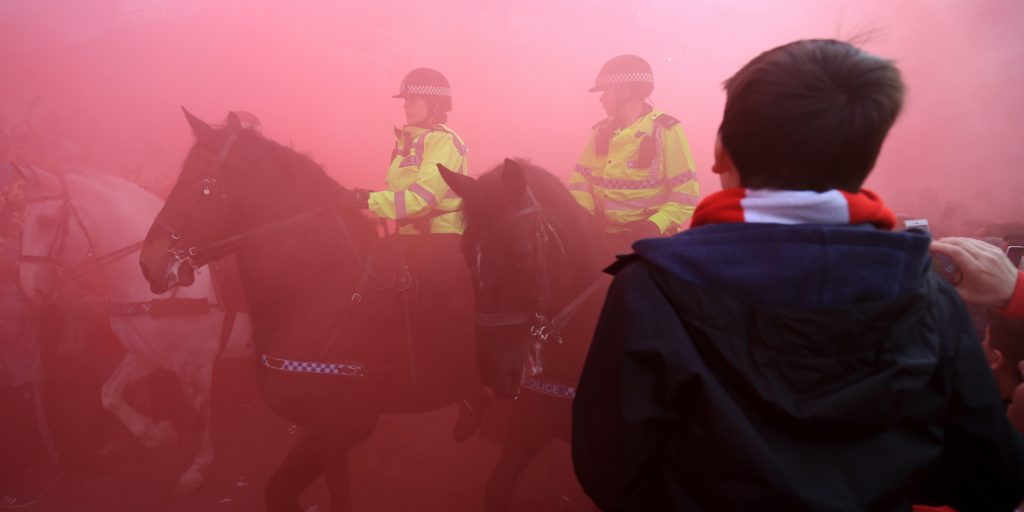 Local forces have requested matches to be moved away from their original venues.

At least five Premier League matches have been earmarked to be played at neutral venues by police if the competition resumes, plus any further games where Liverpool could win the title.

The Reds’ match against Everton on the weekend of June 19-22 could be the first possible opportunity to seal the title if Manchester City slip up against Arsenal on June 17, and the Merseyside derby is one of five which has already been requested to be moved by the hosting police force.

There are also four others set to be moved to a neutral venue – Manchester City’s home matches versus Liverpool and Newcastle, Manchester United v Sheffield United and Newcastle v Liverpool. But more may have to follow if there is a game where the championship is still on the line.

It is understood the Premier League is not expecting further matches to be added to the list, even though London mayor Sadiq Khan has expressed concerns about supporters congregating in the city.

The UK’s football policing lead, Deputy Chief Constable Mark Roberts of South Yorkshire Police, said in a statement released to the PA news agency: “Our discussions with the Premier League throughout this process have been positive, with a shared focus on the priority of public health.

“As such we have reached a consensus that balances the needs of football, while also minimising the demand on policing. The majority of remaining matches will be played, at home and away as scheduled, with a small number of fixtures taking place at neutral venues, which, contrary to some reports, have yet to be agreed.

None of the clubs set to be involved in matches at neutral venues have made any comment so far, with the subject set to be discussed again when clubs gather for a meeting on June 4.

The Premier League released a statement saying its ambition was to complete the season on a home-and-away basis “where possible”.

It added: “We are working with our clubs to ensure risks are assessed and minimised, while co-operating with the police at a local and national level.

“Discussions with the National Police Chiefs’ Council and UK Football Policing Unit have been positive and are continuing. We are prepared for all outcomes and have a neutral venue contingency.”

It is understood the contingency not only covers requests for matches to be moved by individual forces on safety or security grounds, but is also in place to cater for the potential for the imposition of localised lockdowns which could force matches away from their original venues.

Brighton chief executive Paul Barber, who has been one of the most vocal opponents of matches being played at neutral venues because of the effect on sporting integrity, said he expected his side to play all their remaining home matches at the Amex Stadium.

“Our position from the start has always been that we would prefer all matches to be played in the grounds in which they were originally designated,” he said.

“But I think we’ve got to give credit to the Premier League and to the police and to the Government for listening to our arguments about not having all of the games at neutral grounds and doing what they can to support the integrity of the competition, and the sporting fairness of the competition, by having the majority of the remaining 92 games played where they should be played.

“We all took a pragmatic view at yesterday’s meeting as far as we could because we don’t know specifically which games might be affected that we may have to compromise.

“And if that means that the vast majority of games can go ahead at the places that they’re intended to go ahead at, that’s fantastic and it’s a very, very significantly better picture than when you and I were talking on this subject a month ago.”