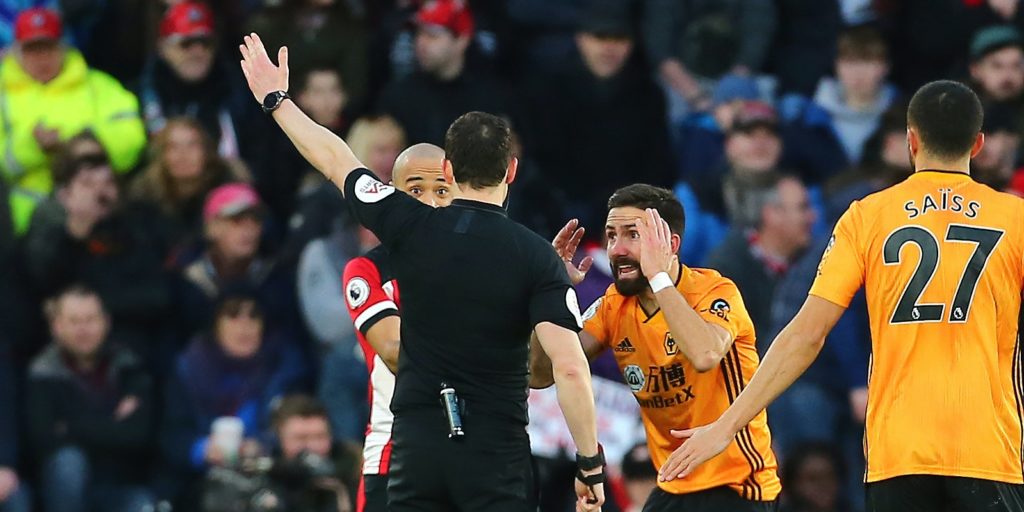 The absence of fans at Premier League matches will not only impact players’ performances but potentially the decisions made by referees, according to a sports psychologist.

With play halted due to the coronavirus pandemic in mid-March, ‘Project Restart’ is in the final stages as the English top-flight prepares to return on June 17.

But action will resume in front of empty stands due to the risk of Covid-19, bringing the unusual pressure of millions of extra television viewers but empty stands in grounds that would usually be packed.

Marc Jones, professor of psychology at Manchester Metropolitan University, believes home advantage will be impacted by audience-free sporting events, pointing not only to player performances but the way referees officiate.

“We know a crowd can play a positive role in terms of creating a home advantage and you can think of lots of places that are hostile to go,” Jones, a sports psychologist, told the PA news agency.

“One of the potential reasons for that is match officials, so there’s a bit of research that shows that match officials will tend to favour the home team.

“There are a lot of potential reasons for that and one of them is because of the crowd noise they’ll tend to make decisions that will appease the home crowd.

“It might be as well that actually because the noise is louder when an away player goes crashing into a home player, that sort of noise aids as a sort of a decision-making heuristic – it’s a shortcut: massive loud noise, must have been a bad tackle.

“So there’s some research that supports the idea that officials will favour the home team and crowd noise has a role to play in that.

“I think that’s one of the things that is quite interesting about this setup, where we have teams playing in front of empty stadiums, how that effects performance and in particular whether we see that typical or general favouritism towards the home team that we see from match officials when we have a normal crowd.”

Home advantage has reduced in Germany given the results in the opening weeks of the Bundesliga resumption.

But while the absence of fans will negatively impact some players and clubs, it will have benefit others.

“We know that teams consistently tend to perform better at home than they do away,” Jones said.

“Lots of reasons for that, one of which is that some players report feeling more confident at home – they feel more comfortable in their own environment and because of that they will tend to play better.

“The interesting thing about players playing at home in front of empty stands is that there hasn’t been much research because normally people play in front of packed stadiums.

“There is one study that actually took advantage of a measles epidemic in college basketball in the USA and they found that actually people tended to play better, their performance was better, when the crowd was absent.

“Their performance metrics, the way they assess the performance, was actually better than when the crowd was there, so there’s one little study that says that people actually might play a little better without the crowd.

“Now that cuts both ways. Of course some people need the crowd to thrive off, gives them the energy.

“Other people sometimes get negatively affected by the crowd, so you might see players performing differently to what they would have done in front of a crowd. Some players come to the fore and others not.

“There’s lots of footballers as well that sometimes say that when the team is going through a bad run, playing at home is actually very difficult for them, particularly when the crowd gets on their back.

“It’s really interesting to remove the dynamic of a crowd from a sporting event because there are some teams for whom playing at home is a bit of a challenge if they’re on a bad run.”