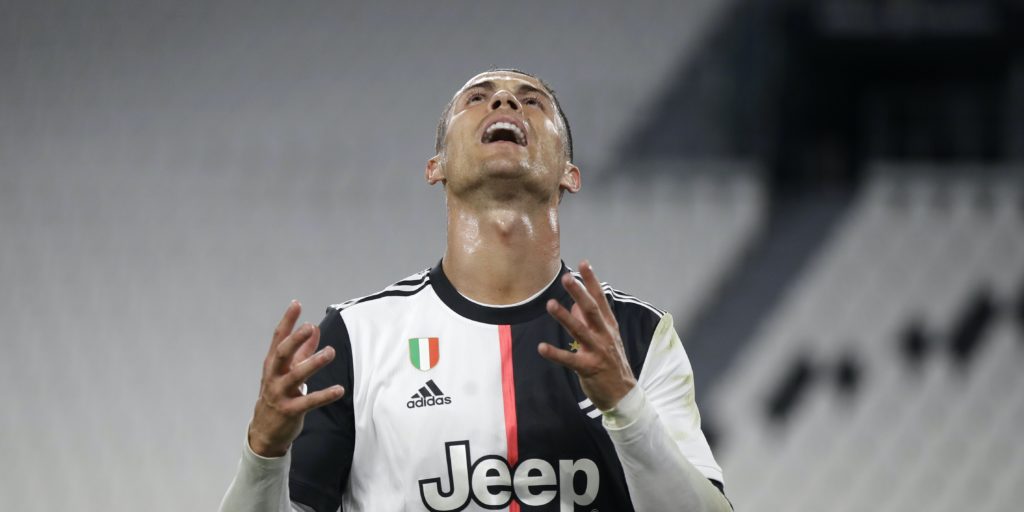 AC Milan played most of the match with 10 men.

Cristiano Ronaldo missed a penalty on Italian football’s return to action but Juventus still reached the Coppa Italia final despite being held by 10-man AC Milan in Turin.

The goalless draw proved enough for Juve to progress on away goals courtesy of a stoppage-time Ronaldo penalty in a 1-1 draw at the San Siro almost four months ago.

The Portugal forward hit the post from the spot 16 minutes into the game but the match turned in the home side’s favour again just six seconds later when Croatian striker Ante Rebic caught Danilo with a chest-high studs-showing challenge. The misjudgement as he chased a clearance saw him red-carded.

There was little in the way of goalmouth action, although Milan stepped up their efforts as the game progressed without creating many openings.

History was made as Milan brought on five substitutes and Juventus four in new rules designed to help squads deal with the fixture demands following the coronavirus suspension.

Juve will play either Napoli or Inter Milan in the final with the Naples side 1-0 up ahead of their home leg.

There was a dramatic finale to the Valencia derby as it finished 1-1. Rodrigo gave the hosts an 89th-minute lead at the Mestalla but Gonzalo Melero levelled from the spot for Levante in the seventh minute of stoppage-time.

Dani Olmo hit an early brace as RB Leipzig consolidated third place in the Bundesliga with a 2-0 win at Hoffenheim.

The Turkish Super Lig resumed following its suspension with Fenerbahce beating Kayserispor 2-1 at home and Trabzonspor winning 3-1 at Goztepe.

There were 350 supporters present as Esbjerg beat Randers 4-2 in the Danish Superliga after a socially-distanced crowd was allowed to return.